Tire Test: To Scoop Or Not To Scoop?

Scooping is the talk of the motocross broadcast on Saturdays so I thought why not break it all down for you since I ride on a Dunlop MX14 and MX33 regularly. The MX33 is a soft to intermediate terrain tire that is the usual go to tire for most Dunlop riders. The MX14 is a sand to soft terrain tire that is not used “that” much by the common weekend rider. The aggressive scoop design most likely scares riders off as they feel that this is a pure sand tire only. However, as I found out the new MX14 does cross over to intermediate terrain well. 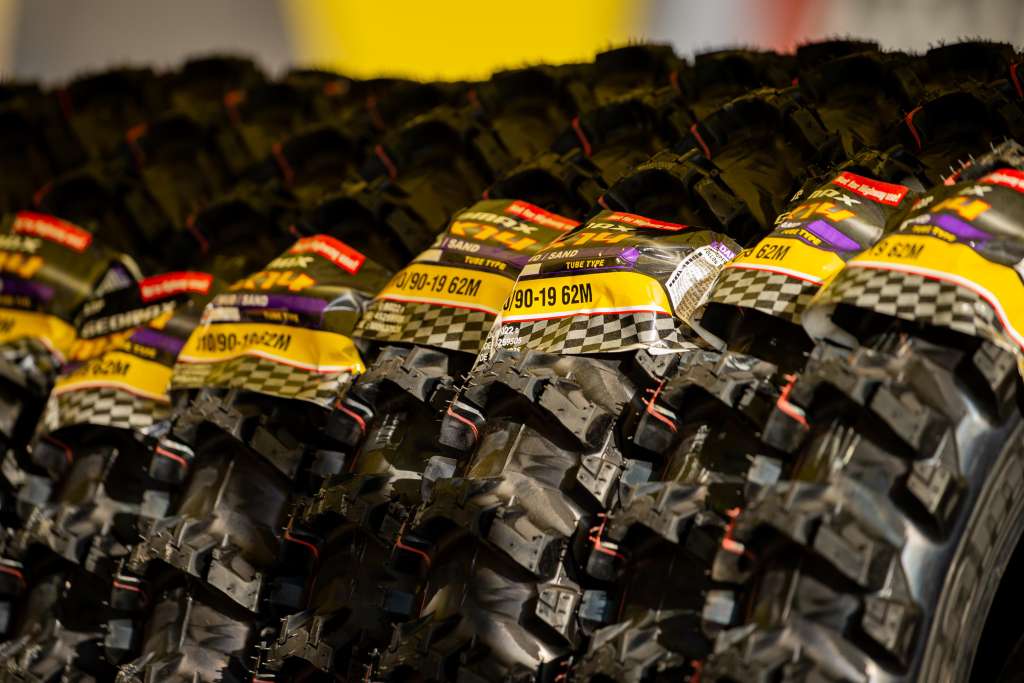 The obvious reason why you see Tomac on the scoop tire is because it has a superb forward bite feel and propels the machine forward in a quick manner as well as stays on top of the soft dirt better than a MX33. Where the MX33 has an advantage is on harder surfaces where the knob can dig in better because of its tread design and tread block compound. The carcass of the MX33 is also better on extreme lean angle when on harder surfaces. But… That’s right, there’s a but. With the new design and pattern that Dunlop has come up with, the MX14 does cross over to hard pack dirt much better than the previous MX12 version they offered.

I decided to go to Glen Helen and ride all day to get a feel of the changing track (on each tire) and where each tire shined as well as didn’t shine. Glen Helen is your typical sandy on top, hard underneath type of track. When the track workers do go to work on a good prep it can be down right deep in the mornings, but by 12-1PM most of that soft dirt is pushed off or dug into that firm base of the California desert. 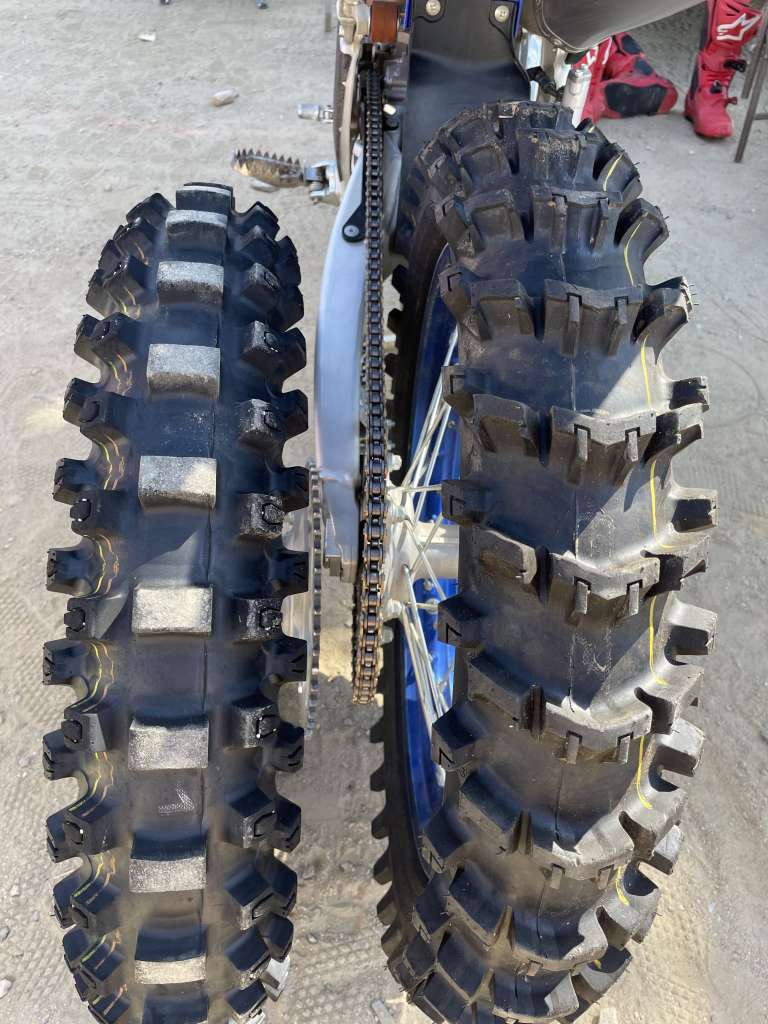 I started off with the Dunlop MX14 in the morning and let me tell you all, if you are racing at your local track and have an early moto, this MX14 is like cheating off the start. If your local track is remotely sandy or sloppy in the mornings, the MX14 will help you keep momentum and allow you to ride lower in the rpm’s without spinning your tire out of ruts/corners. At Glen Helen, even though there are slick/hard spots the MX14 works great because it pushes the bike forward in a quicker manner once accelerating out of corners. You can really feel the bike get on top of the softer dirt in a hurry once you start to roll the throttle on. In the hard/slick areas the MX14 will break loose on its side knobs sooner than a MX33, but it isn’t a sudden slip or drift. The slide that you feel is controlled and not abrupt like the old MX12 tire. Even when under load (on throttle) in hard pack sweepers the MX14 can be controlled well enough that you may not think you’re on a scoop. The advantage of the MX14 (compared to the MX33) is so much greater in softer conditions, that you will take the slight disadvantage the MX14 has in hard pack areas. I would have thought the MX33 would have been day and night better in hard/slick spots but the control wasn’t that much greater with the MX33 on. I will say as the day wore on and both tires got there newness worn off that the MX33 does have more control overall (when worn down some) than the MX14. Once the MX14 has some time on it, the carcass feel breaks down and you will get more roll out of the rear of the tire than the MX33. If you gave me a three hour old MX33 and a three hour old MX14, I would take the three hour old MX33 because the carcass holds its integrity better on lean angle, longer.

So with all this being said… Let’s throw out the cost part of this for one second. If you had the money to purchase one or the other to go race and change tires constantly for every other race or so, I would pick the MX14 because it has a huge crossover that I would have thought it would never have. It’s ability to crossover into hard pack is truly mind blowing for a scoop tire. I also will say that the Pirelli Scorpion “sand” scoop tire is also great in the same way. However, Pirelli’s carcass has a softer feel, thus it breaks down even quicker. The MX14 ha such an advantage on the start as well as accelerating out of corners or soft berms that it makes “dealing” with a little sliding in hard pack worth it to me. This is why Tomac gives JT$ the look after he gets asked about why he chose the scoop. 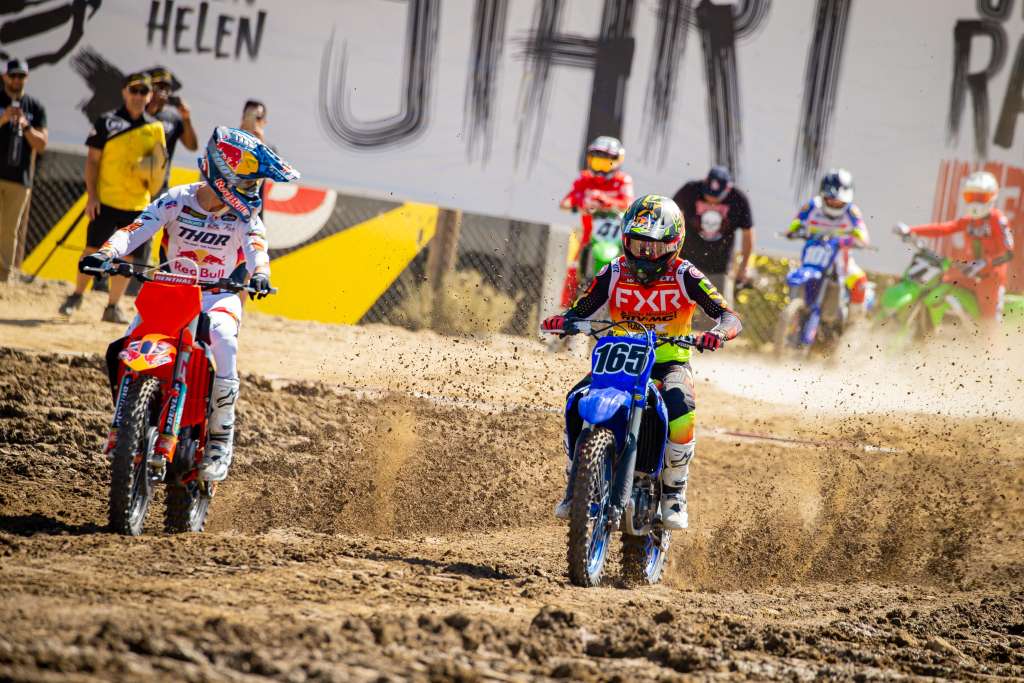 Now let’s say money is a factor, like it is for most of us reading this, I would say go with the MX33 because it has a longer duration of feel. What I mean by this is that with time not being on our side with the wear of rubber breaking down, the MX33 will hold its feel much longer than the MX14 will. I can ride with a worn out MX33 and get almost the same feel on the track during the duration of its life. I can’t really say that the MX14 has that same feel for that same duration.

With all of this being said, if you have some money and can afford some new tires, don’t be scared to run the MX14 at your local track that is soft to intermediate! Thank me later when you pull holeshots on your buddies or blow by them as you accelerate past them out of corners. The MX14 will last a few hours of intermediate terrain life, but can last much longer in pure sand conditions. For example, I ran the MX14 at Loretta Lynn’s for two motos and the “tits” of the tires were still intact after both of those motors (hardly any wear shown). I can’t say that will happen after two GH motos though.