Second injectors aren’t all that new in the motocross world. Kawasaki and Suzuki all have been doing dual injectors for a while in moto, but some manufacturers aren’t completely sold on the the dual injection system. Jamie over at Twisted Development has made/developed his own dual injector system for the Yamaha YZ250F and it’s now finally ready for the consumer. Previously, this was used/tested on the Club MX Yamaha team’s machines with great results, but how would it work with a stock 2022 Yamaha YZ250F engine and a FMF 4.1 slip on muffler. This is where  I came in!

Jamie explained to me that it took him a while to match the aromatization of the fuel/air mixture as well as where to place the second injector in the intake to make the most power, but he has found a combination/setting that works with the mapping of the Vortex ECU that the kit comes with. Basically, the secondary injector will make the YZ250F feel like it’s got an accelerator pump (you old school guys will understand). It creates an air/fuel mixture that hangs around for a minute, better mixing itself up and enables a spray of fuel to be dumped into the intake when you whack the throttle open. On paper that means an engine is “supposed” to get more RPM response and low end feel. It also means more overall power is available when you want it, but what did it really do on the track. Screw the dyno results, we want to know what a human dyno (the rider) feels on the track. 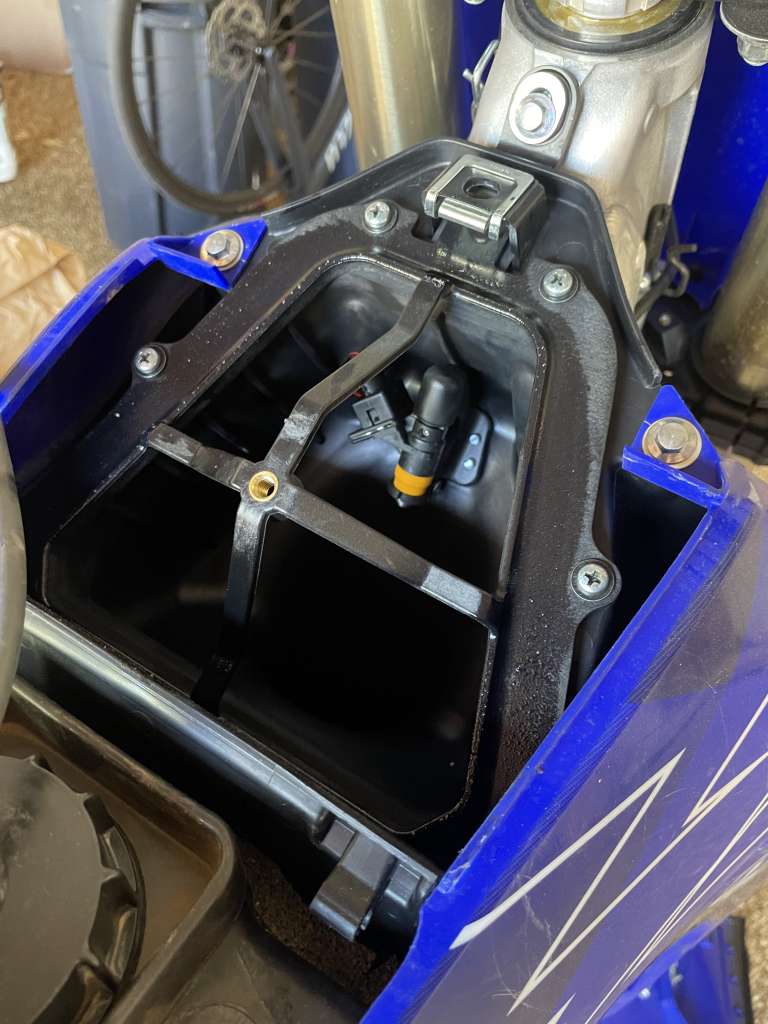 I have ridden our 2022 Yamaha YZ250F in stock form for most of the year. It has the most bottom end pulling power in class, but lacks some top end over-rev compared to the KTM and Honda. It is most definitely a front side engine that allows riders to short shift and lug if necessary. With the Twisted Development dual injector kit the YZ250F now has more bottom end pulling power, more RPM response and more notably more top end/over-rev than I have felt  in quite sometime. The YZ250F now has a distinct bark to it (with the help of the FMF 4.1 of course) and the rear wheel connection that you get is something that you will notice almost immediately. Third gear roll on power is more pronounced and the bike becomes more lugable, like it was in years past (2019-2020). The dual injector kit comes with a Vortex ECU like previously mentioned and with that comes pre-programmed Twisted Development maps that ensure you get the proper tune for this kit.

The difference that this dual injector kit makes (to me) is more noticeable than a full GYTR head/piston kit. With the GYTR kit you get more low to mid range pull, but I just don’t get that initial low end response/throttle crack like the dual injector kit has. I also feel with the stock engine, along with this dual injector kit, the YZ250F feels like it has more top end pulling power. Jamie sets up the Vortex ECU rev limit up to cut out 100 RPM higher compared to the stock ECU, but you can ask Jamie to increase that by another 100 RPM for more over-rev pull (for a total of 200 RPM). However, just know as you climb the rev ladder, you will get less durability, but to me 100-200 is a safe cut off limit. If you think you will not be able to feel that extra 100 RPM up top, you would be wrong. 100-200 RPMS can be felt by any semi sensitive rider or racer and helps with getting out of corners or pulling up hills.

I was blown away by how much difference this kit can make on a YZ250F. With the front side intake design that the Yamaha comes with along with this second injector, this mid sized four stroke becomes a race weapon (or even a vet rider’s dream bike). More low end, excitement down low and more top end? Who wouldn’t want that? I also like the reliability standpoint in this $2099.00 kit. With a modified engine kit, that may cost you around $2000.00, but you get less durability most of the time and maybe not as much gain on the track. With this kit you get to keep all the stock internals and actually feel a difference on where your money just went. This isn’t a cheap mod, but at least you can feel where that 2K just went. If you’re serious about adding horsepower to your YZ250F and some more excitement, this is a great buy.

The Twisted Development second injector kit comes with air box, intake, Vortex ECU and recommends you to use the Twin Air PowerFlow Kit or GYTR Air Filter system. You can order or call Twisted Development at 951-698-7222 or visit them at www.td-racing.com.