The 2022 Honda CRF250R is a hot commodity and an aftermarket muffler is even hotter. With COVID-19 wreaking havoc on supply, new muffler systems have been a little slow to get released to the consumer. The Yoshimura RS-12 for the 22 CRF250R should be in stock by the time you read this so let’s compile some notes and talk about some points about the new RS-12 system, before you make a 1000.00 purchase on a aftermarket muffler shall we?

Installing the new full system took me less than 20 minutes and the instructions were very detailed. All of the parts that came inside the box fit perfectly and it was easy enough that my 15 year old son installed it! In my opinion, Yoshimura is one of the highest quality exhaust manufacturers in the industry. I have been a part of a few R&D departments and I can tell you first hand that the quality, fit and finish of a Yoshimura exhaust is impressive. I wanted the stainless full system because it was less expensive ($909.00) but is a little heavier than the stock muffler system by just over a pound. I didn’t care about weight as much as performance so stainless is fine with me! 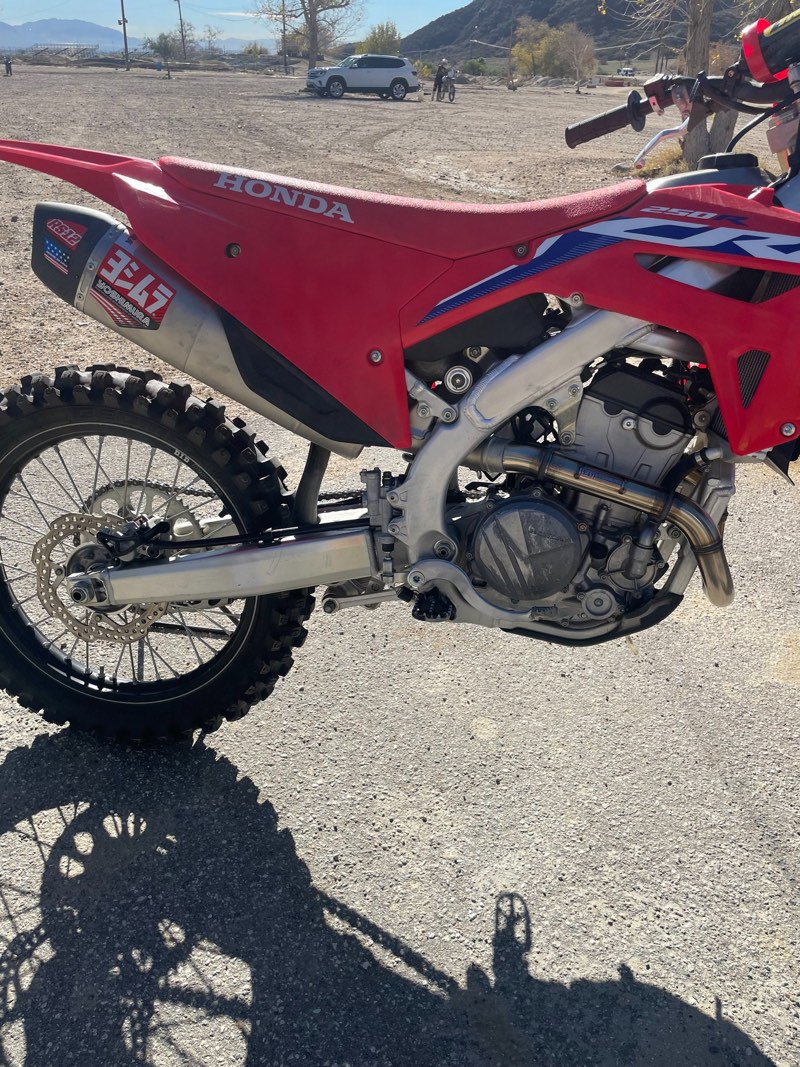 Now to the part that everyone wants to know…Does the Yoshimura help the little red screamer? The simple answer is yes, but who likes simple answers? Not us! With the stock system, the 22 CRF250R pulled nicely bottom to mid-range, but lacked some top end and over-rev. When trying to grunt up obstacles, the engine still needs some help, but the 22 CRF250R is much better than the 21 in this department. This had Yoshimura rethink their RS-12 for 22 and came in with a spec that keeps most of that bottom end/low RPM responds but added mid range meat and top end pulling power. With the stock muffler the Honda still liked to be ridden a gear lower at times in corners (than other 250F machines), and if I didn’t, it took a bit of clutch feathering and more shifting to get the bike pulling hard again.

As soon as I fired the bike up with the new RS-12 exhaust it was clearly a bit louder, not obnoxious, but a nice, throaty sound that was deeper and less raspy than the stock muffler. I tested the stock system back to back with the Yoshimura system on the same days, so it was cool to see the places on each track where the bike really felt different. The most noticeable place the bike felt better was exiting out of corners while accelerating out of tight inside ruts. With the stock system I had to slightly slip the clutch and pay attention more to my RPM’s, all the way up the lip (If there was a jump out of a corner). When I bolted on the Yoshimura system I could leave it in second gear and just use the meat of the new found Yoshimura power to pull me up and over those types of jumps. Some areas of the track I had to be in second gear and then immediately shift into third with the stock system. With the Yoshimura system I could now be in second gear and let it pull that gear longer rather than having to shift. The Yoshimura RS-12 can also recover quicker if you’re in too high of a gear through corners. The RS-12 picks up quicker and makes the bike feel a little lighter through the mid-range. On soft berms the RS-12 allows the rider to stay on top of the soft stuff better than the stock system because of that quicker rev feel. From mid to top end is where you will notice the big difference between the RS-12 and the stock system. You’re able to pull each gear longer and with a harder feeling pull when making that shift. I would even venture to say that the mid rpm response is slightly crisper when in third gear not to mention that recovery feel in third gear through deep corners is notable right away. Bolting on the Yoshimura RS-12 full system will not make your Honda more responsive down low, but I appreciate that it didn’t complete kill that newfound low end that Honda needed for 22. The best part is that the Yoshimura muffler looks much cooler than the stock ones and sounds ten time better.

If you have a 2022 Honda CRF250R and feel like you’d like a bit more mid-top end power, I’d definitely look into the RS-12 stainless system. Yoshimura offers three options, the slip on mufflers ($719.00), the full stainless system ($949.00), and the full titanium system ($1259.00). Admittedly none of these are super inexpensive options, but it’s one of the few things in today’s four-stroke world that can provide a true bolt on benefit.