Not only motocross riders, but ALL motorcycle riders alike can agree on one thing; there is almost nothing worse than going to load up your bike to go ride and noticing a leaky or blown fork seal. CRAP! There are two main ways fork seals end up leaking; one is from letting mud dry on your fork tubes, then going riding and forcing the dried mud into the seal, which tears the seal. The other is from small rock nicks on the fork tube, which can create sharp high spots that tear the fork seals as well.

Pro Tech is a company out of the United Kingdom that reached out to us to test some of their fork guards that are meant to help keep your fork tubes a little more out of harm’s way. Pro Tech noticed that modern day fork guards on production bikes are very bare and exposed on the back side, that leaves the fork tubes susceptible to being chipped by rocks/mud. Along the lines of what KTM used to do with their full wrap around production fork guards, Pro Tech designed their guards to wrap slightly further around the back of the fork leg, which made for an easier installation process than the old KTM guards. I mean it’s fork guards people, let’s not make it rocket science to install right? The theory is that with less area for rocks to get past the guard there is less of a chance at damaging the fork seals. 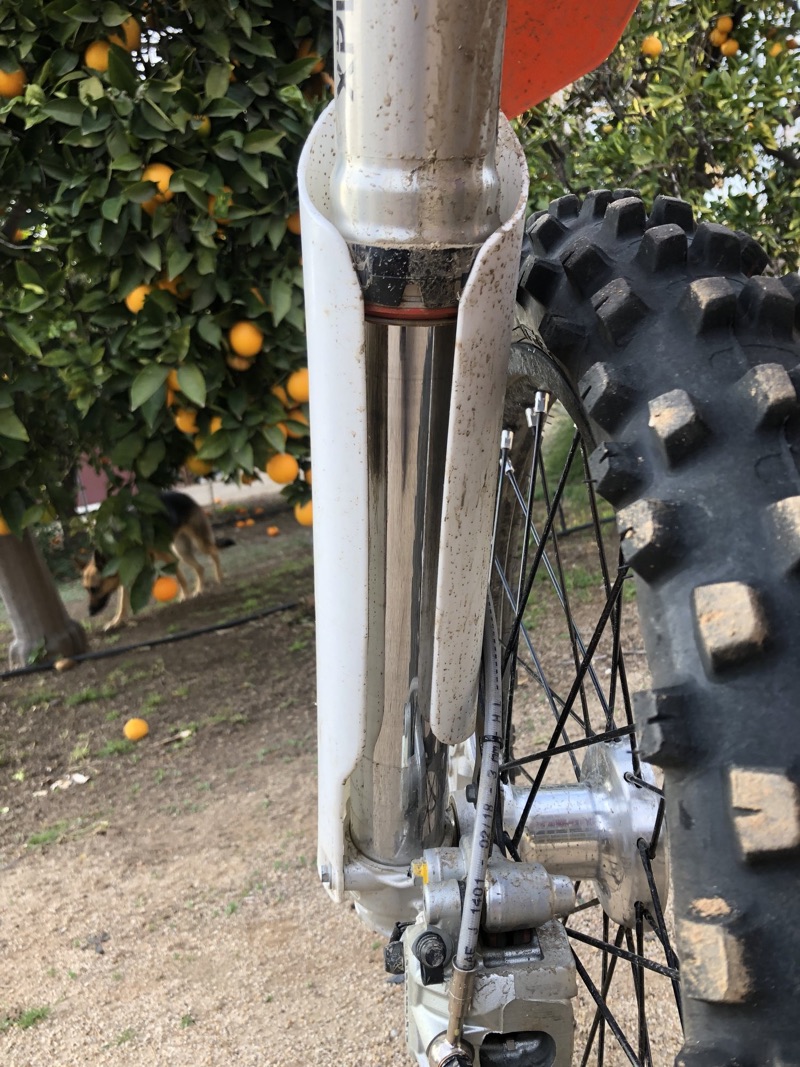 We used these guards first on our 2019 KTM 450XC-F test unit seen zero nicks/chips on the forks when we took them off. The next bike we put them on was our KTM 300 XCW TPI and after riding in plenty of mud, following other riders at speed on high speed gravel trails, we have yet to have a fork seal failure. The guards come with all the necessary mounting holes and/or clamps to hold the front brake cable or trip meter wire to the guards as well as coming in a few different color options. The fit of the guards are spot on, but I don’t think they look quite as good or have the quality of production fork guards. However, to me, if they truly make the seals last longer it’s worth the slightly less looking quality. Most production fork guards plastic structure feels sturdier to the hands compared to the Pro Tech guards, but the PT guards didn’t break or crack under the normal bush whacking we do out here in California. One other area where the Pro Tech guards are lacking is in the diversity of brands. So far they only offer guards for KTM, Husqvarna, Sherco, and Honda, but after talking with Pro Tech they told us that the next step is to make guards for more models as long as the demand is there. Although we don’t get that much mud on the west coast, I have put a lot of hours on these guards and like previously stated, I haven’t seen an issue yet. For around $50.00 they are a relatively inexpensive way to protect your forks a little more. If you want some extra insurance on those long off-road or muddy motos maybe this could be an option for you riders out there. You can check out Pro Tech at https://www.protechguards.co.uk/ to see if they have guards for your machine. If you have any questions about the Pro Tech fork guards feel free to reach out to me at Michael@keeferinctesting.com.

We are fully committed to keeping up with our complete transparency of tests, so we will always make sure that the consumer is completely communicated to about any product. -KK