I originally wanted to do a Hinson versus Rekluse clutch test for the 2019 Honda CRF450R, but after going back and forth for a few weeks (testing these parts), I decided that both of these mods are such an improvement over the stock clutch system, that there shouldn’t be a “winner”. Each clutch has a specific character/feel on the track, but both are equally as impressive and much better than the stock system. Since we had to purchase our own 2019 Honda CRF450R test bike this year, I wanted to really try/test quality upgrades, that this bike absolutely “needed”, since we would be having to sell this unit at the end of the year. The 2019 CRF450R “needed” a clutch upgrade and so this evaluation process was born. I let my resident mechanic/blue collar test guy Matt Sirevaag install and ride with each clutch system initially and then I tested each to get my impression. This article is based on what we thought collectively, but if you want to hear even more background/feedback about these parts, check out the Rocky Mountain ATV/MC Keefer Tested Podcast that will be up very shortly. -KK

For years Hinson has been one of the go to clutch manufacturers for factory motocross and off-road race teams. In the last few years Rekluse has been making a name for itself as they are now on a ton of race teams in any given paddock as well. So when it was time to install a clutch in our 2019 Honda CRF450R test bike, it only seemed right to ring up Hinson and Rekluse to see what they had to offer for a bike that needed help in this department. Hinson sent us their complete nine plate clutch kit (part # HC989-1901 ) that adds two extra friction plates (to a total of nine), while the stock Honda CRF450R uses seven friction plates. The Hinson complete clutch kit comes with a new clutch basket, inner hub, pressure plate, fibers, steels, clutch springs and let’s not forget the icing on the cake, a billet proof clutch cover. This is a complete kit that replaces all of your stock clutch components. 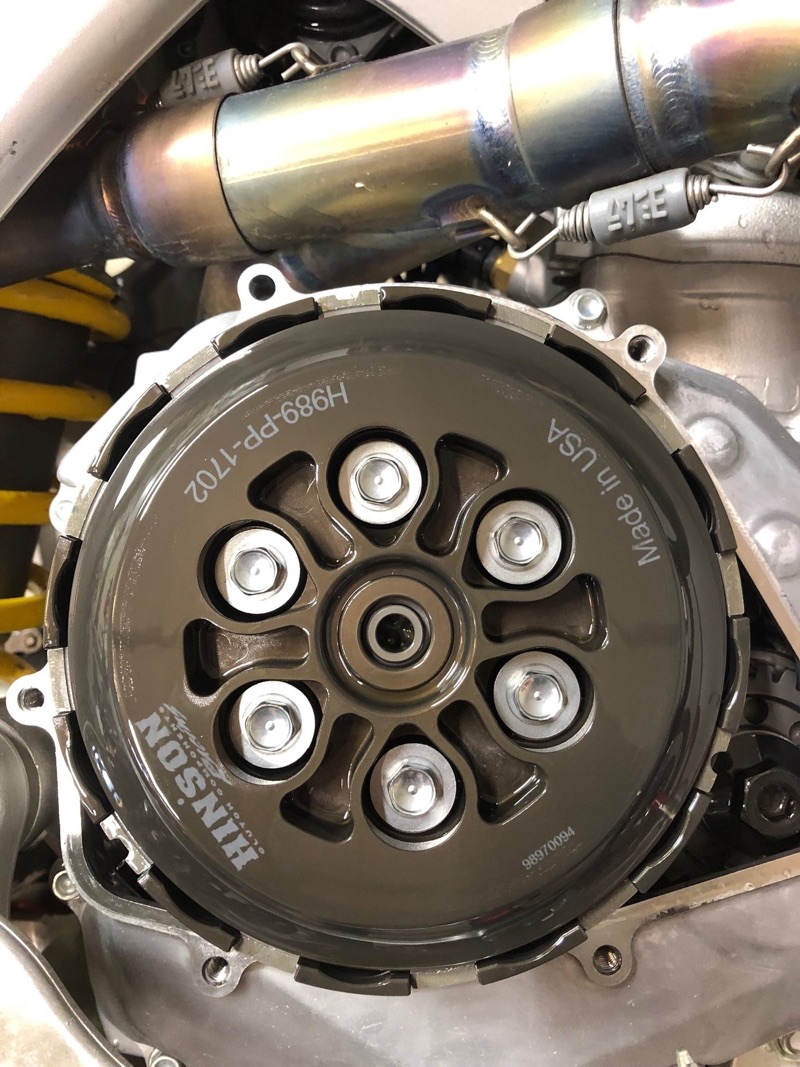 When it comes to the 2019 CRF450R there are a couple items that can be addressed to improve the clutch. It has been well known that Honda has not exactly led the 450cc class in clutch life and/or in the clutch lever pull department. These have been weak points on the Honda CRF450R for quite sometime and usually the bike gets ranked down in shootouts because of it. Honda has made progress from their old four spring clutch as the new CRF450’s have gone back to a six spring clutch. The stock 2019 CRF450R clutch has a very narrow window of engagement and is tough to really get a linear engagement/progressive actuation when attacking the track. This makes it very hard to modulate the power in corners as the clutch makes the power similar to a light switch that has an on or off type of feel. I am sure most of you Honda guys can relate as our email inbox has seen a flood of Honda clutch questions. The clutch pull takes He-Man type strength and can expedite arm pump in a moto, which sucks huge for us blue collar riders! With a narrow window of clutch engagement and a very hard clutch pull it really makes it difficult to manage the power (of the Honda), especially late in the moto as fatigue starts to set in. The stock Honda clutch also tends to fade as the moto’s get longer and if you’re a clutch dragger like Keefer is, things can get ugly (or hot) in a hurry. This leads us to clutch life; I am not even close to what you call a clutch abuser (like Keefer), but I have always taken pride in the life I can get out of a stock clutch on other machines. With this Honda CRF450R I even showed signs of wear and slightly burnt clutch plates at less than twenty hours. This was a problem that needed to be addressed.

Besides riding these dirt bikes, I love working in the garage and wrenching on them. When the Hinson package arrived I told the wife I would be eating dinner in the shop and I began to tear into the 2019 CRF450R’s clutch. Just be forewarned that this Hinson system is a more in-depth install then just changing out clutch fibers and steels. There are some special tools needed to help with install of the clutch basket. Besides your basic hand tools you will need a clutch hub holding tool to remove and Install the new clutch hub. Also needed is a drill or grinder to remove the primary drive gear from the stock hub, so that you can re-install it onto the new Hinson billet hub. Hinson provides great instructions with pictures, which are very helpful for you novice mechanics out there (cough, cough, Keefer). Lastly don’t forget to use your OEM Owners Manual to provide you with the correct torque specs. Hinson also states adding 300cc more oil than stock, so 1300cc without changing an oil filter and 1350cc with oil filter replacement is your new levels with the Hinson Kit.

The first test of the Hinson clutch system was during the Dubya USA Vet Nationals at Glen Helen. Right off the bat I noticed that the clutch pull was slightly easier, which made me happy right away. The second positive aspect of the Hinson clutch that I noticed was that the engagement of the clutch was not nearly as narrow (or on/off) as the stock clutch. I feel this was the best part about the Hinson set up because it really helped open up my corners. I now had a clutch that I could easily modulate the power of the Honda’s engine character without shutting off the throttle. Most times with the stocker I would have an issue with the front tire jumping out of ruts or wheeling right out of a corner because I had trouble with the on/off engagement feel. However now I found myself rolling through corners with more speed and confidence knowing that I was hooking up better. The Hinson gives the sensation of added rear wheel traction and a more connected feel to the track. I didn’t notice any clutch slippage or jutter while abusing the clutch during motos and Keefer even mentioned that he could ride/slip the clutch (during his 30 minute motos) without the clutch fading.

The Rekluse Torque Drive clutch install is easier and at the same time harder to install than the Hinson. Why? Let us explain… It’s easier in a sense because you are using your stock outer clutch basket, which means there is no need for any grinders. It’s slightly more difficult because there are a lot more moving parts like the basket sleeves, which will test your patience, while installing the fibers and steels. Having said that the other important part to pay attention to is the Rekluse Torque Drive starts and ends with a steel plate, not a fiber. Another difference from most clutch kits is that Rekluse provides (in the kit) three different clutch springs to help tailor the clutch feel/delivery to the rider. Silver giving you the easiest clutch pull, gold, and then red being most aggressive with the hardest clutch pull/bottom end hit/delivery. You can run three silver and three gold or three gold and three red to really help get the clutch feel/power delivery that you prefer. I decided to go with three silver and three gold springs in hopes to help clutch pull feeling at the lever. Just note that the stiffer the clutch spring the harder it is on your transmission under heavy load (acceleration).

As I rode to an undisclosed location (Keefer’s Test Track) with the Rekluse Torque Drive I immediately noticed a much better lever feel than stock and a slightly lighter pull than the Hinson. As I made my way around Keefer’s new test track or I should say turn track, I noticed that the Rekluse has a wider window of engagement than the stock clutch, yet very close to what the Hinson had to offer as well. This makes it a lot easier to modulate the power of the Honda just like I mentioned above. You can really slip the clutch and feed the power better to the rear wheel. This gave me a new found confidence as I was able to cover the clutch and keep the Hondas front tire from lifting out of corners (similar to the Hinson). If anyone knows Kris, you know that you’re always on the clock when you’re riding, which meant thirty minute moto’s to test the Rekluse’s durability. As it neared the end of each moto (which we did over the course of several weeks) the feel at the lever stayed consistent and never seemed to fade on either Kris or I very much at all. Messing with the lever play while riding was minimal and Keefer even mentioned that he barely had to adjust the free play during his sand motos. As with the Hinson, the Rekluse clutch definitely got the power to the ground and gave both of us a little more snap (bottom end response) out of corners. The Rekluse got the power to the rear wheel better than the stock unit and nearly as good as the Hinson. The only difference we both felt was that the Rekluse had a little more bite (or pop/excitement) out of corners than the Hinson. The Hinson had slightly less bottom end hit than the Rekluse, but had slightly better rear wheel traction. The Rekluse made the Honda feel more exciting and playful out of corners without sacrificing traction. Both clutch kits provided much better power delivery/traction than the stock system and have lasted much longer as well. Another positive attribute of the Rekluse Torque Drive is that it actually improved the recovery time of the engine when I found myself in the wrong gear (mostly third gear in tight corners). With just a flick of the clutch the Honda’s engine was right back in the RPM it was supposed to be in.

This was a very educational test for me as I have never tested or used an aftermarket clutch in any of my bikes. Keefer thought it would be a great way for both of us to feel the differences between two companies that know a thing or two about clutches. The Hinson and/or Rekluse Torque Drive clutch systems are just what the Honda needs. They both improved performance as well as reliability, which to me is the most important piece to this test. I am a blue collar type of guy that works to put food on the table for my family, not pay for unwanted parts/bling for my dirt bike.

Hinson’s nine plate clutch kit retails for $1,184.99 and is not exactly what you call inexpensive, but to us, this Hinson Nine Plate set up could pay for itself if you’re hard on clutches like Keefer is. The Rekluse Core Manual Torq Drive retails for $899.00, but since you re-use your stock outer clutch basket, we can see why this costs less (than the Hinson). If I was to go purchase a clutch for my personal Honda, which this one kind of became, I would choose either one of these because they both fixed my two major gripes with the stock 2019 CRF450R clutch. Either one is a great choice, it’s just a matter of how much money is in the ol’ bank account. –Matt Sirevaag

If you have any questions or concerns about either of these products feel free to email kris@keeferinctesting.com and he can hopefully guide you into the right purchasing direction.