As technology and quality of parts advance it’s becoming harder and harder to find things to improve upon on a stock motorcycle. Everything from the wheels to the handlebars have gotten so much better and last so much longer than in the past. That being said there is always one thing that stands out to me when I ride a bike and that’s a good cutch pull/engagement. Like I said, stock parts are great now a days and on my 2019 Yamaha YZ250F that includes the stock clutch lever and adjuster, but there was a little something that I didn’t even know I was missing until I bolted on the Works Connection piece. The stock lever and wheel work decent when they are new and lubed up, but after a while they dry out and they are kind of a pain to take apart for maintenance. When Kris tossed me the WC perch I threw it in my garage and forgot about it for a couple weeks until I broke my stock lever and figured what better time than now to try the new one out. 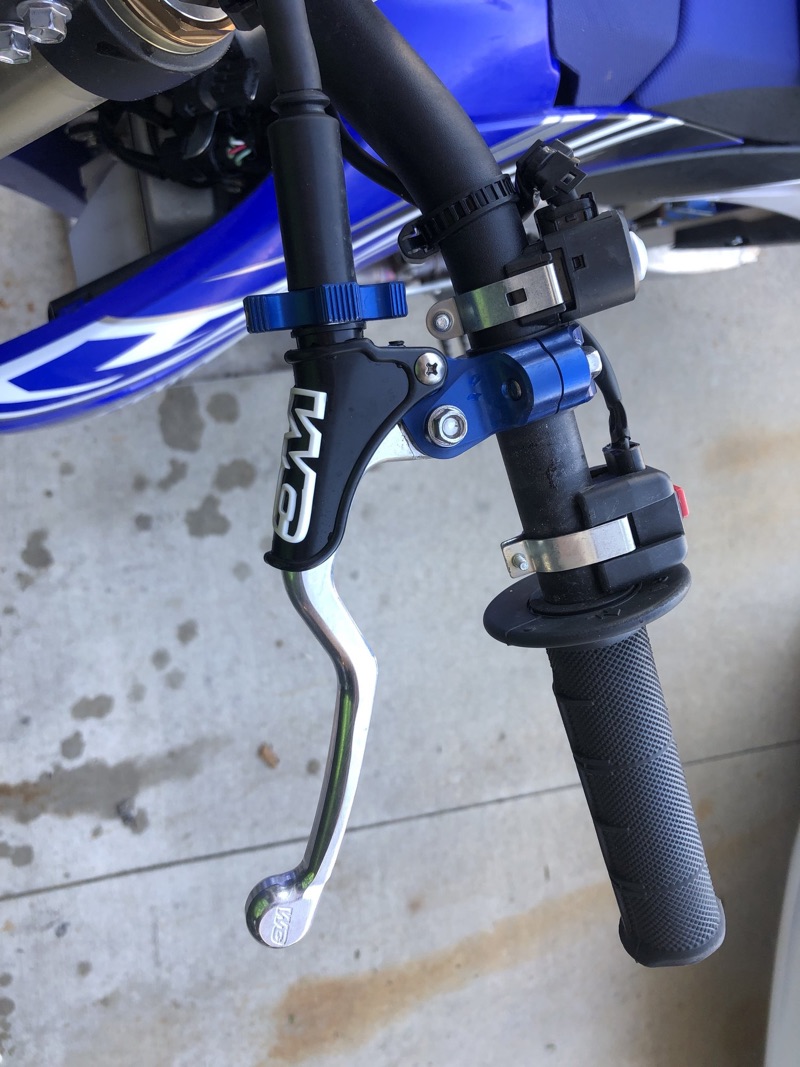 After taking off the stock lever and perch I opened up the new packages (the lever is sold separately from the perch, and that is sold separately from the adjuster wheel) and got all the parts ready to install. The parts are sold separately so you can match your wheel color to the perch of your choice which can also be matched to a silver or black lever. All the aluminum parts are made out of 6061 T-6 aluminum and are machined in the USA. The lever pivot uses a triple sealed bearing to assure smooth clutch action without having to take the lever out and lube the pivot. The adjuster wheel has machined in grooves that a spring loaded ball drops into every ¼ of a turn, so the clutch will hold its adjustment without self-adjusting. The “shorty” lever that is supplied has a nice factory feel to it on your fingertips. WC supplies a high quality 8mm bolt for the pivot which is protected by and embossed rubber cover that screws onto the perch to keep debris from gumming up the pivot. The other supplied rubber cover for the cable makes a nice seal on the perch and stock clutch cable. One thing that I did like (since I’m an off-road guy) was the fact that the adjuster wheel worked just fine with handguards and was still usable. Sometimes with handguards, adjuster wheels are hidden and hard to fiddle with while riding.

Aside from looking much better than stock, the WC lever assembly is more functional as well. The adjuster wheel is easier to use than the stock rubber unit, and the WC assembly is much easier to disassemble and clean. The main thing I noticed is that since WC optimized the ratio of the lever, I prefer the engagement over the stock clutch lever actuation. Although the change was minimal, I felt like the clutch feed was more progressive which gave me a less on/off feeling through corners, making them less jerky. I think that the fact the parts are sold separately is a huge plus because once you buy all three you’ll only have to buy replacement parts in the future if you break something instead of having to purchase the whole thing again. Although the initial price for all three parts is not super cheap with a MSRP of $155.85 (https://www.rockymountainatvmc.com/parts/works-connection-elite-clutch-perch-assembly-p), in my opinion it’s worth the investment for the buttery clutch feel alone. So regardless if you have a broken stock perch or not, or maybe you just want a clutch adjuster that easier to spin on-the-fly, do yourself a favor and check out the Works Connection Elite Perch assembly, because after all, who doesn’t like a smooth clutch pull?