We recently received the 2020.5 KTM 450 SX-F Factory Edition and after dissecting it for a few weeks, we thought we would test a couple different muffler systems on it. We wanted to see if we could improve upon the KTM Factory Edition’s delivery. The KTM comes with an Akrapovic slip on we thought since we have never tried one of their full systems, we would give that a go as well as an FMF 4.1 RCT full system to see how each compares to the standard Factory Edition set up. Just in case you were wondering, we also compared each muffler to one other and give you a breakdown of each category below. 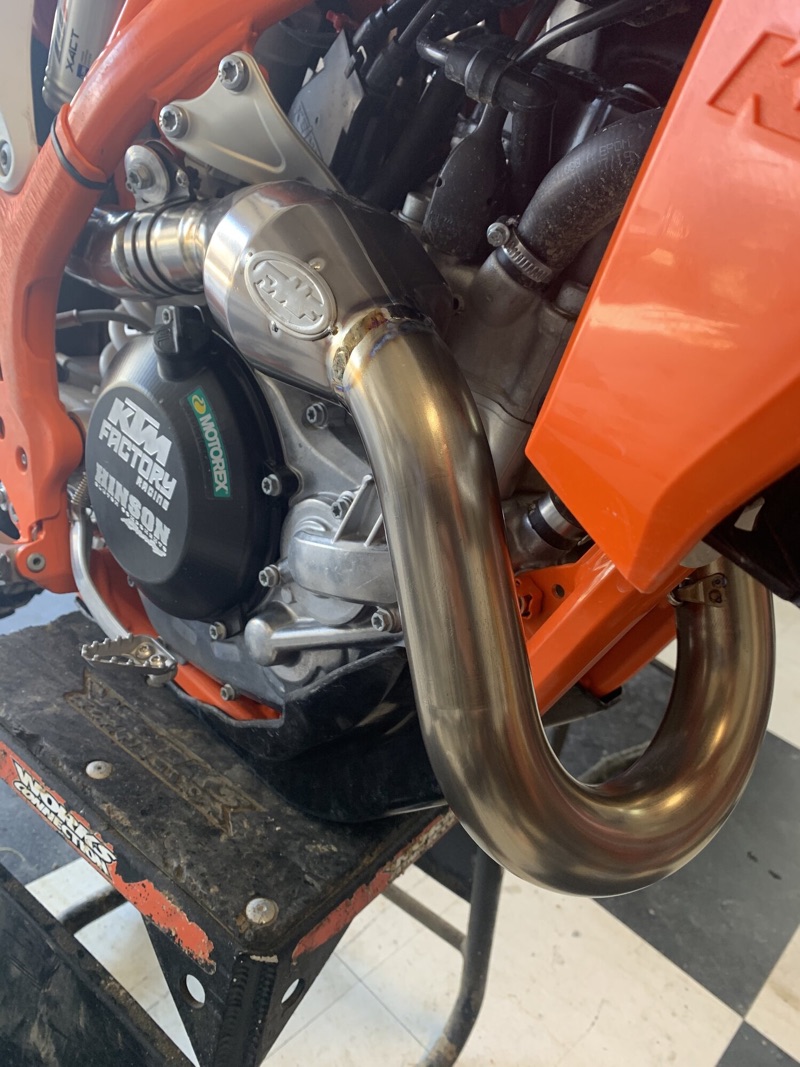 Whether you’re coming out of a corner in second or third gear, you will notice some extra torque feel getting to the next obstacle. With the added mid-range meat of the FMF system it really helped some of the gearing issues I had on tighter, less flowy tracks I tested at. Gaining some mid-range let me use third gear in some corners that I wasn’t able to with the stock system. With the stock system I would roll into these corners in second gear and have the right amount of “pop” to get me out quick, but I had to shift early once exited, to keep the rear wheel from spinning. Third gear was too tall of a gear to get me out of the corner quick, but provided less wheel spin on the exit. It was always a struggle for me to decide on which gear to use when being pressured from behind, by another rider.

With the FMF installed I could easily use third gear and have enough “pop” to get me out of the corner in a hurry, yet it kept the wheel spin to a minimum by being able to use a taller gear. The FMF’s 4.1 system made me think less and twist the throttle harder, something I like doing. I didn’t get any more top-end with the FMF installed, yet it didn’t take any away from the orange machine. I did notice slightly less over-rev with the FMF system (from stock) when I got lazy.

The Akrapovic Evolution full muffler system has a similar character to the slip on version that comes with the Factory Edition, but with added bottom end roll on and mid range. If you’re expecting a ton of added RPM response (excitement) from your full system compared to your standard slip on, you will be disappointed. You simply will not be getting that much added rpm response with the Akrapovic full system. Instead of a smooth roll on that the FE comes with it now has a little more pulling power in second and third gears and pulls those gears much longer.

Mid range pulling power is increased and the muffler pitch is so quiet you never really feel like you’re “on the gas”. The mid range pull is much more linear and longer than the standard slip on and being able to shift a little earlier with the full system makes it easier to ride in softer conditions. I had a hard time with the KTM 450 SX-F Factory Edition at softer tracks not recovering, if I shifted early out of a corner. With the full system at the same track I was able to shift into third and not have to worry about covering the clutch as much.

Top end and over-rev is where this Akrapovic Evolution system shines. Adding top end and over-rev to the already very capable Factory Edition only makes this machine more fun to ride. Again, I can’t stress on how deceiving this system is because of it’s quiet nature. I really had to focus in and feel how quick I was going from point A to point B on the track because the pitch of the muffler never sounds “racey”. However even with its quiet note, the Akrapovic full system lets the KTM pull so much farther that it almost feels like a swapped to an aftermarket ignition. The connection to the rear wheel with the full system is unmatched and even though it may seem like it’s not very responsive, the KTM with the Akrapovic full system allows the rider to get on the gas sooner through corners.

If you’re reading this and wondering why you can’t simply purchase an Akrapovic headpipe for your Akrapovic slip on, the answer is they will not mate up. The Akrapovic slip on has a smaller diameter OD, (where it meets the stock headpipe), so purchasing just the headpipe will not work.

Below are your typical engine categories and which muffler is best in what area.

Which One Should You Purchase?

If you’re looking for more bottom end excitement or rpm response look towards the FMF system. If you’re looking for the lightest muffler available and want more top end/over-rev you will love the Akrapovic. Cost is also a factor to me, so if I am looking at the most bang for my buck, the FMF is less money and I’m getting a good performance gain compared to the standard Akrapovic slip on that comes on the FE. The FMF muffler stands up to more abuse as the Akrapovic can look hammered quicker. That being said I was super impressed with the connection that the Akrapovic had on dry/slick tracks, so depending on what conditions you ride could be a factor in your purchasing decision as well.