The 2020 Honda CRF450R is a popular machine. After all of my years with Dirt Rider Magazine as well as doing my own thing over here at Keefer Inc. Testing there has been one thing that hasn’t changed… The amount of page views and questions that I get about the Honda are always more than any other color! As a test rider, I like the Honda CRF450R because it’s one of the most difficult bikes to set up for a wide variety of tracks, so that keeps me trying different products and thinking of ways to try and make it better. As a consumer or a local racer, the 2020 Honda CRF450R can drive you nuts at times right? It’s super fun to ride, but sometimes can be a handful at certain types of tracks.

In this article I am going to test the Yoshimura RS-9T, FMF 4.1 RCT, Akrapovic Evolution titanium muffler systems for the 2020 Honda CRF450R and give you some feedback on each one’s engine delivery character. I picked these three muffler systems because they have been one of the best three that I have tried on this particular machine. This isn’t a shootout as much as what each system can bring to the table. These three muffler systems have similar characters in some areas of the powerband, but also have enough differences in which you can make a decision based on what type of power you want from your Honda.

Fun Fact: I tested these mufflers on the 2020 Honda CRF450R as well as the 2020 Honda CRF450RWE just to see if the ported head, that the RWE comes with, would change the way each muffler delivered its power. After going back and forth on each machine, the character of each muffler system was the same on the stock cylinder head as it was on the hand ported Works Edition head. The description/results below is accurate for both machines. 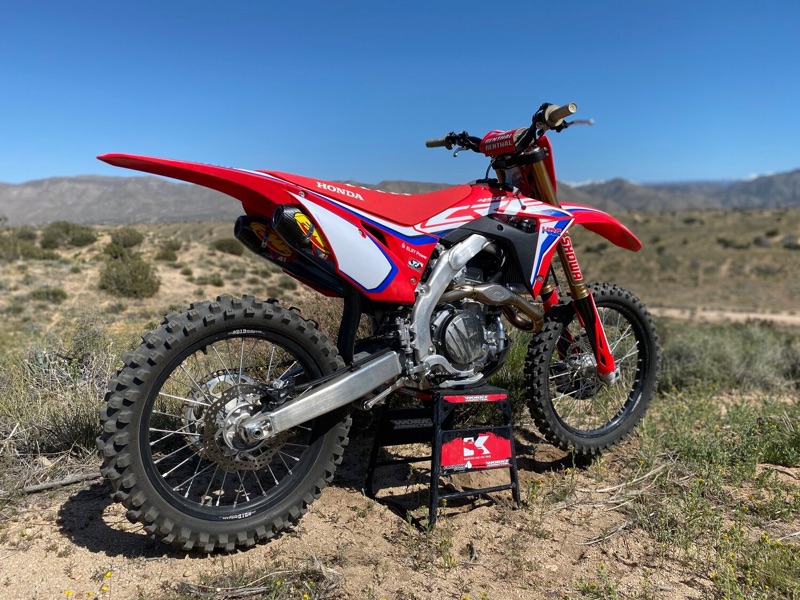 The FMF 4.1 muffler system has more bottom end and throttle response than the other two muffler systems in this class. The Honda doesn’t necessarily need more bottom end, but the way the FMF system delivers its power can give the rider some added freedom when trying to ride third gear through corners. The bottom end comes on strong and the Honda keeps its exciting, crisp RPM response feeling, but lets you run third gear through corners more than the stock, Yoshimura and Akrapovic muffler systems can. Using second with the FMF system almost makes the Honda a little too much too handle (on roll on) through very tight corners. When going to the FMF 4.1 system I reverted back to map 2 (mellow map) instead of map 1 (standard map) and ran 14/52 gearing. By using map one and going to this gearing ratio, it helped calm the Honda’s chassis down in second gear a little, but still kept its fun natured, snappy engine character. Mid range is broader and pulls farther than the stock muffler, but isn’t as good as the Yoshimura system in this area. Up on top end the FMF system almost mimics the Yosh in pulling power feeling on the track with maybe slightly less over-rev than the Yosh system. What I like about the FMF muffler system is that it allows the rider to ride a gear higher in some areas of the track and rewards riders that like to lug their bikes more. The Honda in stock form is not the best lugging machine, but with the FMF system it gives the red bike more of a lazy man’s type of feel by allowing me to use third gear more. The FMF system is louder than the Yoshimura or Akrapovic systems by quite a bit even with the inserts in, but keeps that racey deeper sound.

The good news is that the muffler packing has lasted longer than I expected. We are over the 12 hour mark on the 4.1’s and they still sound good. I used to get only 8-10 hours on other single FMF muffler systems, but these duals have proved to be more durable.

Once installed and on the track the Honda’s exhaust note turned from high pitch 250F’esq to a deep throaty more traditional 450 factory race bike sound. The crack of the throttle (or RPM response) is slightly smoother and less crisp than the stock or FMF systems, but to me this is a good thing for the Honda chassis. Rolling out of corners, while in second gear, the Honda feels like it has more traction than the FMF and was more controllable while accelerating out of hard pack corners. The slightly smoother RPM response takes away the Honda’s excitement feel ever so slightly, but helps you gain a little more control coming out of corners. The mid range pull is healthier than stock, but with the Yoshimura system you will not be able to pull third gear through tight corners as well as you can with the FMF system. The Yoshimura system is very controlled and has more mid range torque than any other muffler in this test. Even though the Yoshimura system doesn’t have that bottom end throttle response like the FMF system the recovery is still very good. With just the flick of the clutch lever (in third gear) the Honda will be in the meat of the power once again and you will be down the straight in a hurry. I noticed top end and over-rev was as good as stock (which is great), but not as good as the Akrapovic. To me the Yoshimura system is like the YZ450F of the muffler world. It does everything “pretty well” and gives you more rear wheel consistency that the Honda needs. You could tell Yoshimura was focused on smoothing out the bottom to mid-range pulling power when they designed this muffler system and they succeeded in doing so. It is also impressive that they didn’t lose any top end/over-rev in the process and gain a little more control.

The muffler packing that the Yoshimura RS-9 mufflers come with is superb and will last you longer than any other packing in this group. Yoshimura also offers the customer refurbishing, just in case you don’t want to DIY. The stickers on the mufflers themselves also last longer and will not turn color as fast as the others in this group.

Once I swapped to the Akrapovic Evolution muffler system, I could immediately tell this system helped the Honda chassis calm down the most. The Evolution system lets the Honda’s engine roll on smoother at low RPM’s and that smoother feel helps the rear wheel connection as well as provides less pitching (off throttle) than any other system in this test. AKA MORE COMFORT!!! The Honda CRF450R now builds a smoother roll delivery and a pulling power that is longer through the mid range than the FMF or Yoshimura. This type of character can allow you to use second gear in corners more because that second gear hit is not as abrupt or quick, so that doesn’t upset your technique or the chassis. The Akrapovic also allows the rider to shift later out of corners and that means second gear is more usable with its increased over-rev capabilities . Pulling power up top is increased slightly as your shifting points can be altered now because of the longer pull in each gear. I ran the 14/52 gearing with this muffler system but decided on going back to the stock 13/49 gearing in order t get some mid range recovery back. The Akrapovic doesn’t have the the bottom or mid range throttle response like the FMF or Yoshimura systems so this can give the Honda a slightly heavier feel on tighter tracks. The Honda has so much power to work with that a little less “hit” as well as “recovery” can actually help on faster/flowier tracks, but can also make it slightly heavier feeling than the other two mufflers when moving the Honda side to side. I really like that the Akrapovic system relaxes the engine as well off throttle and provides the CRF450R with less engine braking. This really comes into play on tracks with hard pack chop and small de-cel bumps.

The sound/pitch of the Akrapovic is ridiculously quiet when on the track and will almost give you that MXGP sound and feel. It still has that racey, crisp sound on higher rpm’s, but just not that raspy high pitch tone of the stock muffler. I preferred the quiet inserts left in because it created more back pressure and gave me more traction at the rear wheel (out of corners) in all three engine modes. I was normally a map two guy with the stock muffler, but with the Akrapovic installed I am now a map one guy all day long because of the added rear wheel/friendlier connection. The muffler packing has proved to be durable but the stickers on the mufflers turn color quickly and get blown off.

Overall: I always let people know if you have no problems with your stock muffler system and like the way your Honda runs then by all accounts you can disregard this test. Just because I test something here doesn’t mean you absolutely 100% NEED it! If you’re in the market for a muffler system, have some extra money and want to know which direction to go then study up! If you want to alter or change your Honda’s engine character slightly, this test can help you decide on which direction you want to go. To me all of these systems in this test are better than the stock system because it helps the Honda’s chassis in one way or the other and offer spark arrestor inserts for the off-road guy. The Honda doesn’t need more power as much as it needs a broader more forgiving connection to the rear wheel. These systems help the Honda in this area.

Breaking The Systems Down:

If you have any questions about this test, please feel free to email me at kris@keeferinctesting.com. I am here to help if needed!