If your like me after having a bike for a few months you begin to get a little more particular with your bike and start wanting to try different things. If you read my article on the building of this bike (for the Vet National at Glen Helen) you know I threw a lot of things at it in a short amount of time and got the opportunity to try some high dollar modifications. You would also know that once I raced the event I wasn’t necessarily pleased with my result and felt I lost a bit of that comfy feeling I once had with this bike. Initially I thought it was due to not racing at those speeds and pushing my limits, but in the weeks after I couldn’t get that feeling back. I was somewhat puzzled and decided to go back to the stock base and start over. The reason for this wasn’t because I didn’t believe the modifications I had done weren’t the right ones, but I knew there was a couple areas that needed a tweak here and there to find that feel. This is one of the things that’s hard about testing as well as fine tuning a bike, you can get lost and off track, but still be really close to that ultimate setting. I felt this was where I was exactly at, so going back to my opening statement, I started to try different things. 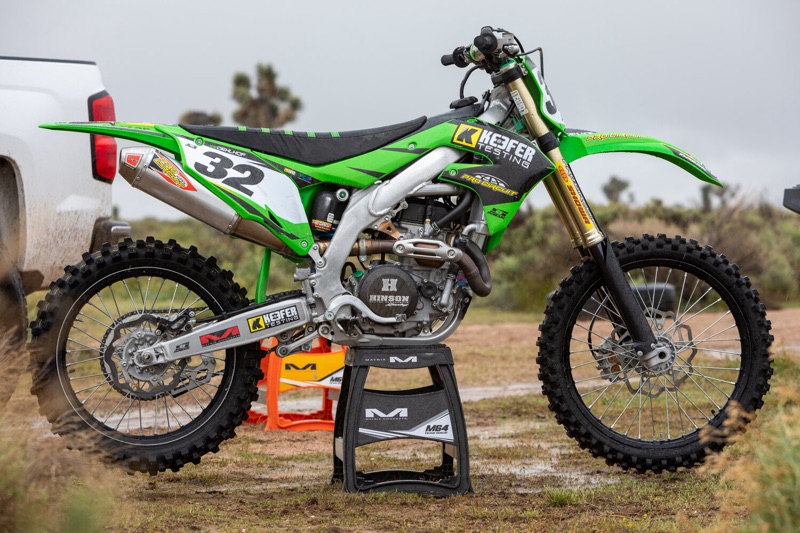 The first area I focused on was the suspension, but mainly the shock. In stock form the shock has some decent comfort, has a softer initial feel, which can give you comfort in those smaller acceleration bumps yet can provide predictable traction when the track begins to dry out and conditions worsen. For a guy who is 190 pounds like myself or an intermediate to pro level rider, the stock shock wallows a little on rolling whoops or g-outs and can bottom on big landings. It also tends to squat a smidge too much when exiting turns, which can result in a harsh feeling. I took the info I had and talked to my guy Luke at Pro Circuit and he said he had a couple different settings he’d been working on that addressed the issues I had. Now as you may also know I did have the A-kit cartridge set up for the Showa forks when I raced the Vet Nats. I unfortunately I couldn’t keep those, so I had PC set up my stock forks for a comparison and additionally I wanted to do some lower budget items for those frugal consumers like myself.

Let’s start with the forks… Obviously the Pro Circuit A -kit cartridges are better with bump absorption, small chop/big bumps, is excellent on hard landings, as well as slap down landings. The best feature of the A-kit is the traction, lean angles on sweepers,  lean angle on hard braking, traction under hard braking in braking bumps is excellent and allows you to charge most situations. However my question was how will the stock forks stack up? The stockers were actually closer than I originally thought. They soak up hard landings/slap downs, big bump absorption is great as is small bump absorption and I still feel confident charging into braking bumps. The only areas where the A-kit performs better is when I am looking for traction while in sweepers and hard braking. So the question is what is the best bang for your buck? That depends on your situation, but the A- kit is better due to simply better internal technology/tolerances and if you’re a serious racer, it’s definitely worth the money. If not, the PC stock re-valve  is still a very good option that will allow you to push the green bike’s limits and still be comfortable.

The previous shock that PC did was just a tad on the stiff side on that initial part of the stroke, which if I was able to ride faster would have probably been fine, but at my age and unwillingness to hit the ground, I have my limits. With that being said I look for comfort and predictability, probably just like you. The revised setting kept the character that I liked with the stock shock and improved it in the areas that it lacked. Initial hold up was improved, but kept that small initial area of plushness allowing the shock to absorb the small bumps and not squat too much ending up too far into the stroke and become harsh. This also eliminated the wallow feel in g-outs and rollers, improved big bump absorption and harsh landings were handled with ease. I purposely flat landed off a couple jumps and was really impressed on how well it absorbed the impact. Overall, I’m really happy with this suspension package because I am now in that comfort zone that keeps me from going crazy when I am trying to push it.

If you’re looking to get your KX450 suspension done, are near my weight (190 lbs.) and want this setting, you can reference this article to the Pro Circuit guys. They can get you dialed in with what we came up with.

When I rode this bike with the stock exhaust I remember having a controlled, connected feel with the power. The throttle had that connected feel to the rear wheel, the power felt seamless and my corner speed was really good through all areas (1,2,3) of each corner. After exiting is where I felt the stock power needed a little more pulling power. Initially I went with the full Ti-6 system from PC and it produced the results I was looking for. It helped the KX450’s power from initial crack of the throttle and up through the mid to top end. If not for a conversation I had with a friend on how I was liking the bike, I would have never tried the slip on version that PC offers for this bike. I was happy with the power output, but just wished I could move it around where I needed it most. He suggested the slip on muffler with the stock header, so I said why not.

The slip on brought back the feel I was missing, but still produced a little better mid to top pull than the stock version. The stock header is longer, which produces a smoother yet responsive power that is easier to control for me. The Ti-6 header is shorter which produces a snappier feel, but also can be harder to control on harder surfaces. The two slightly different power bands and power deliveries can work at different tracks, so just make sure you know what you’re looking for before purchasing. If you’re like me and grew up on two-strokes you may still have that style of hitting the throttle hard and clutching the bike more than you should. I’ve adapted to the four-stroke style of riding for the most part, but there is still a part of me that gets a little “two-stroke” when I am pushing hard. That being said, I found the stock header with the PC slip-on allowed me to still ride that way (even though Keefer tells me not to) and allowed me to stay in control yet carry more corner speed. I can tell you that “feel” I was missing was found again and I believe it’s a combination of the power delivery of the stock head pipe and PC slip on coupled with the revised shock settings. On entering turns the bump absorption and calmness of the shock matched with slightly more engine brake feel from the longer head pipe that allowed me to carry more roll speed on the initial part of the corner. Once through area 1 of the corner, the transitioning into rolling the gas on through area 2 and 3 provided me with the controlled power delivery that makes the KX450 stick better through shallow ruts.

Additionally the delivery allowed the chassis to feel more calm through acceleration chop and produce increased comfort and traction I was missing. It boils down to preference, what suits your riding style and what is your end goal. When I was younger and racing more, I would have preferred the shorter head pipe with the snappier power. These days when I’m  looking for more comfort and predictability I like the characteristic of the slip on and longer head pipe. So remember when you get a little off track with your settings and struggle, try to reset, make small tweaks and I think you’ll find you were closer than you thought. I wanted to write this article to give you a few more options to try just in case you were searching for something more after your 2020 KX450 honeymoon phase. We will be trying a couple more modifications to this Kawasaki KX450 in the coming weeks so stay tuned to keeferinctesting.com to see what I have in store.