The senses of the human body are incredible, especially the sense of smell. I have always found it fascinating that you can smell a certain scent and your mind has the ability to take you back to a specific time your life. When I got my order of Blendzall I didn’t recognize the packaging, nor the scent of the raw oil itself. It wasn’t until I mixed it into my YZ 125 and started it, that the scent took me back to my first time at a motocross track in the late 1990s. You see the reason I didn’t recognize the packaging, or the raw smell is because when I was growing up we used to just get our two-stroke mix from the local chevron gas station because it was the cheapest thing around and it was on our way out of town to go ride. Keeping that in mind, I remember my brother taking me to the motocross track for my first practice (around 96’ or 97’) on a bitchen 1994 KDX 200. The first thing that stuck out to me when we got there was the smell of castor oil coming from the exhaust that seemingly everyone was using to mix in their two-stroke fuel. There is just something about that smell that brings back fond memories of a simpler time when life was less about Instagram and more about sitting on tailgates and talking smack.

Like I said, I had never tried Blendzall or any other castor oil for that matter until this month when I got my shipment. Blendzall has been in business since 1959 when Ray Hook turned his passion for going fast into a racing oil business. The name Blendzall was used to describe how the oil will blend with all types of fuel. When doing some research on the company I found that Blendzall set the speed record for a go-kart with a top speed of 152 mph (holy shit). Over the past 60 years many factory teams have relied on Blendzall, in fact rumor has it that factory Yamaha was dumping out Yamalube, and re-filling the bottles with Blendzall when Kenny Roberts was road racing in the mid 1970’s. 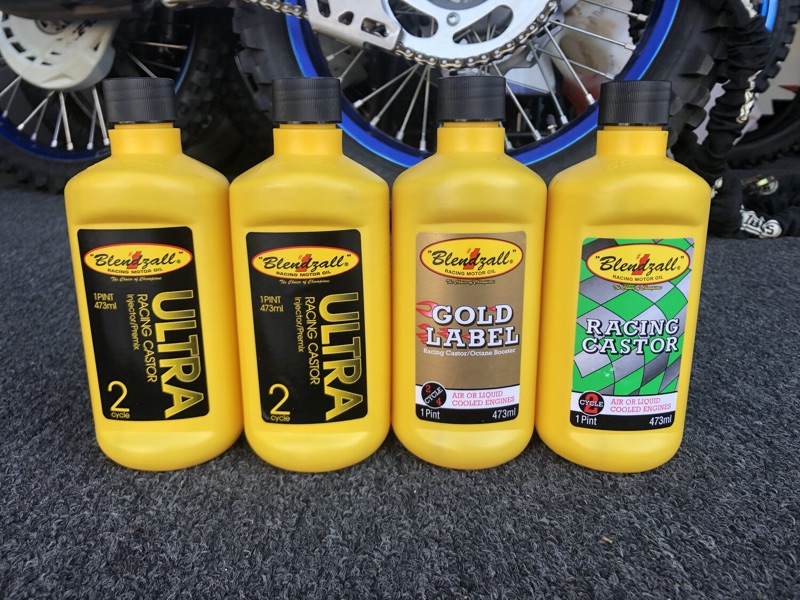 There are multiple reasons people prefer to use castor oil instead of traditional petroleum or even synthetic oils. Castor oil is a clean burning oil and wont foul spark plugs, nor will it puff out blue smoke from your exhaust. The viscosity of Blendzall stays consistent from -30 to 500 degrees Fahrenheit. Blendzall’s formula is designed so that the oil will flow to higher heat areas to help cool, and prevent metal galling.

I’ve never been a big fan of flip flopping two-stroke oils because sometimes different oils won’t mix together properly causing poor lubrication. In fact when I was younger and borrowed my brothers KX 250 on my birthday and told him I couldn’t find the same oil he used so I just used what I could find he was less than thrilled. To this day I will never forget the time my brother kicked my ass on my birthday for mixing two different two-stroke oils in his bike. When I got my Blendzall shipment I made sure to drain my tank of any remaining fuel as well as the bowl of the carburetor. The first thing I noticed was that there is no color to the Ultra Racing oil, which in my opinion is a negative because I (along with many other riders) don’t just have one gas can in the garage. I had to make sure I clearly marked the gas can “mixed” since the fuel inside that can looked just the same as the other non-mixed cans in my garage. For the last 10 years I have been using Amsoil synthetic pre mix at a ratio of 40:1 and have never had an issue. I emailed Blendzall to ask what ratio I should mix to since it was a completely different oil and they said to keep the ratio at 40:1, which was great because one Blendzall bottle mixes five gallons of gas at 40:1, so you don’t even need a Ratio Rite.

With a couple kicks my 125 was fired up and the first thing I noticed was the less smoke coming from my silencer. Every two-stroke I’ve owned puffs blue smoke when it’s first fired up as well as being slightly loaded up while it’s cold and getting to operating temperature. To my surprise that wasn’t the case with Blendzall; there was almost no smoke coming from the silencer. Instead of feeling lethargic and loaded up, the bike was crisp as soon as it came to life. The bike had the same sensation when out on the trails, it felt crisper and I felt like the throttle response was slightly better as well. No matter what the terrain or elevation, the overall sensation was that the bike ran “cleaner” and was more crisp, which made it that much more fun to ride to me.

The only thing I didn’t find on my trail ride were long hill climbs where the bike would be held wide open for prolonged periods of time. I’m sure there would be no issues, but I simply didn’t get the chance to put the bike in that scenario. After years of using traditional oils for my two-strokes, Blendzall has made me re-think what kind of mix I put in my 125. With a price tag of $8.53 per bottle, not only will I be constantly reminded of childhood memories, but I’ll be saving money as well. Blendzall makes oils for almost any application and they all smell fantastic! If you have any questions about this test, feel free to reach out to me at Michael@keeferinctesting.com, also check out Blendzall’s website at https://blendzall.com/.