Let’s be honest, as riders we have all probably uttered these words to a suspension tuner, “I want it plush, but stiff”. I would imagine that every suspension guy has heard that phrase and grits his teeth every time he hears it. That is where Kreft comes in with their revolutionary design of being able to “revalve” the fork with just the turn of a dial instead of taking the fork apart and actually putting different shims in the fork itself. Admittedly when it comes to the internals of how a fork works I am no specialist, but when Matt from Kreft broke it down and explained it to me in dumb dirt bike rider terms, it was very interesting and made a lot of sense.

I have worked with many suspension companies over the years and for the most part they work the same in terms of pick up and drop off. This is the first thing that stood out to me when I started working with Kreft: The first step of the process is an initial phone consultation where you actually build somewhat of a relationship with the representative. You go over the basics, like what bike you’re riding and your measurements, but you also get into what you want to feel out on the trail. Along with that you get a crash course on what makes Kreft different and how their system works. From there they send you an empty box with prefect (I really mean perfect) cutouts for your specific fork and shock. They are so detail oriented they even send you bleeder screws, so just in case you have button bleeders they can be replaced so that your forks don’t leak and ruin the box in transit. The professionalism is second to none while still being personable as well as very helpful and explanatory. 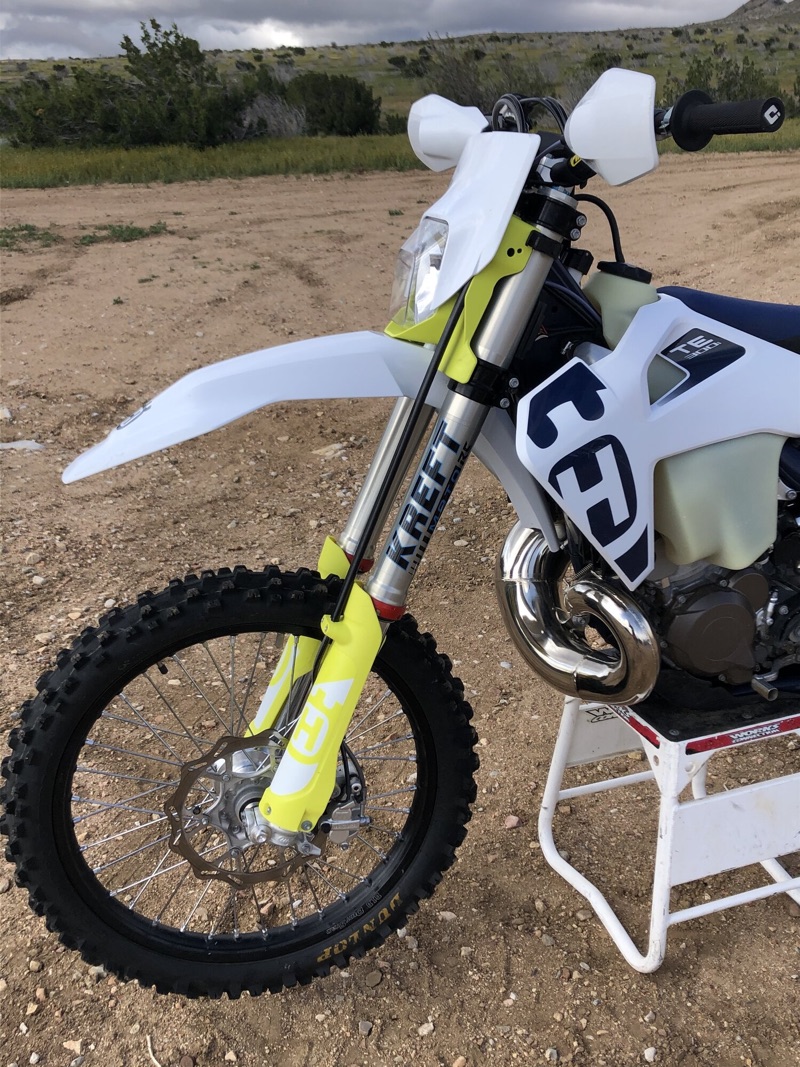 Aside from the obvious spring rate change and re-valve, the fork gets Kreft’s “Re-valve Control”. The way it was explained to me was that on a standard fork the shim stack nut is tightened down on the top of the shims and in that case, the valving is whatever the tuner’s spec is. The valving itself cannot be changed without fully dissembling the fork and changing the actual shims. The only adjustability on a standard fork is compression and rebound clickers. What Kreft does is use a spring that can have more or less pressure put on it with the adjustment of the re-valve Control knob on top of the left fork. What that spring pressure does is put more or less pressure on the shim stack itself. This gives the rider the ability to make “valving changes” on the fly to adapt to a wide range of terrain and disciplines of off-road riding. With the Kreft fork you now have the standard compression and rebound clickers as well as the re-valve control. In doing all these changes Kreft has also changed the damping forces in the left and right fork tubes. The XPlor fork has unbalanced forces in stock form, making the left tube do the majority of the work. What this does is give the left fork more of a chance of having oil cavitation, resulting in poor damping performance. The final thing that was done to the forks was the Microfinish which is said to work better than DLC coating (and is far cheaper) to reduce friction creating less drag and seal stiction than the stock finish.

To compliment the fork changes, Kreft internally changes the shock components to get the greatest potential and best balance of the low and high speed tuning circuits. If the circuits aren’t balanced and one is doing far more than the other there is a greater chance for cavitation which results in poor performance. Once the circuits are balanced and cavitation is no longer occurring, the changes that are made to the clickers have a much larger adjustment range and are far more effective. Along with the spring change on the shock, Kreft also installed the X-Trig preload adjuster which I had never used, but holy shit that thing is awesome!

Now that I have explained all the technical info (to the best of my dumb dirt bike test rider ability) let’s get down to how it all works out in the real world. As I said in my initial test of the TE 300i, any type of riding other than very tech slow trails meant that the TE was going to feel out of place. The fork was extremely divvy when on the brakes or even just when transitioning off throttle. This unbalanced pitching feeling caused the bike to be unpredictable when cornering. In addition to that, anything that resembled a g-out made the bike bottom and rebound too quickly, which doesn’t necessarily give the rider very much confidence, especially in a racing situation. The one race that I did in stock form made it clear that I was having to check up for obstacles that normally wouldn’t phase me, so I knew something had to be done.

After getting the stuff back from Kreft I bolted it on and read through their extensive welcome packet, which was super informative. I set my sag (which they had very close already) and headed out to my favorite trails, which have a plethora of different types of terrain. The first thing I noticed was that the unbalanced feel was no longer an issue. Now when I enter coroners the bike stays further up in the stroke and is much more predictable. My biggest concern was that after telling Kreft that I mostly ride faster paced desert terrain, I was worried that they would make it too stiff and I would no longer have the compliance in the tight technical terrain. Like I said in the beginning of this story, I basically told them that I want it firm, but soft and to my surprise, Kreft gave me my cake and let me eat it too. After becoming more confident and being able to pick up the pace, I found myself going into g-outs as well as slamming into bigger whoops with more speed. Initially the fork had a slight quick feel that would cause the front tire to lose traction, but after slowing down the rebound three clicks, the bike stayed planted much better following hard landings.

The only other issue I had with the front end was that I felt I still needed more bottoming resistance. I tried going in on the re-valve control, but that wasn’t necessarily the feeling I was looking for. While going in on the re-valve control helped my issue, it took away a little of the initial plushness that I liked. After talking with Kreft, they recommended I simply get a syringe and add 15ml of oil to both forks. After doing this I was able to keep the initial settings on the re-valve control while still getting the bottom resistance I was looking for. When it came to the shock, Kreft was really close on the setting I loved out of the box. I had a slight kick in the rear on de-cel bumps, but it was only off-throttle. To combat this Kreft recommended that I open up the high speed compression all the out. After doing this the kick was eliminated, but I felt the bike was bottoming too frequently, so I followed their recommendation and worked the high speed adjuster in by ¼ turn at a time until I found the balance that I desired. One misconception that I think a lot riders have (I used to as well) is that if your bike is bottoming it’s too soft. It’s perfectly ok for your bike to bottom if the bump or landing warrants it. Bottoming out from time to time means you are using all of your suspension travel. This is what you want! Use all the travel, but still have a comfort/performance blend for your type of riding.

Kreft prides themselves on having great customer service, provide a high end product and also a product that has a very wide range of adjustability. When they told me that I could ride technical single track with the same bike that I rode at the moto track, I was skeptical. My last test before writing this article was doing just that, I went to the moto track. Before riding I looked at their recommended setting for moto, adjusted it and started moto’ing. Now was it just as good as a moto setting would be if the suspension was built for moto? Not entirely, but the adjustments for moto made the bike comfortable enough on the track that I was jumping every obstacle without blowing through the travel as well as cornering with confidence. I didn’t feel like the suspension was holding me back by any means and I wasn’t out of my element on this bike. The mere fact that one bike can be capable of such different disciplines with small adjustments is super impressive. I think that Kreft is really on to something and will only be getting more recognition as time goes on.

The price breakdown is as follows: Xplor Re-valve Control and Re-valved shock is $1,200 (including seals and fluid), the addition of springs (if needed), Microfinish and X-Trig spring adjuster brings the total to $1,800. Like I said before, Kreft prides themselves on being very high end and in my opinion you get what you pay for. Every part of dealing with Kreft was top notch, from their box, customer service, quality of parts, and performance of the suspension was very impressive. If you are in the market to fix your 4CS, AER, or Xplor suspension, I would highly recommend giving Kreft a call. If you have any questions about the performance of the Kreft setup on the TE 300i feel free to reach out to me at Michael@keeferinctesting.com. That being said, if you have any technical questions about the parts itself reach out to them because I’m just a test dummy and won’t be able to answer your questions. Kreft’s contact is 541-797-0700 or email them at Info@Kreftmoto.com.