I had the initial impression of the Akrapovic Evolution muffler system as I was doing a MotoConcepts/Bullfrog Spas Honda team test. I noticed that they have been running Akrapovic systems on their bikes, so I asked if I could borrow one to see how it worked. Akrapovic’s Evolution line is their full titanium muffler system and includes more in the complete package than other system that I have unwrapped. The welds are beautiful and to me the quality of the complete system is second to none. Installing the Akrapovic takes a little bit of finagling, but with some patience it does line up and fit well, as long as you leave most of the bolts loose when installing. 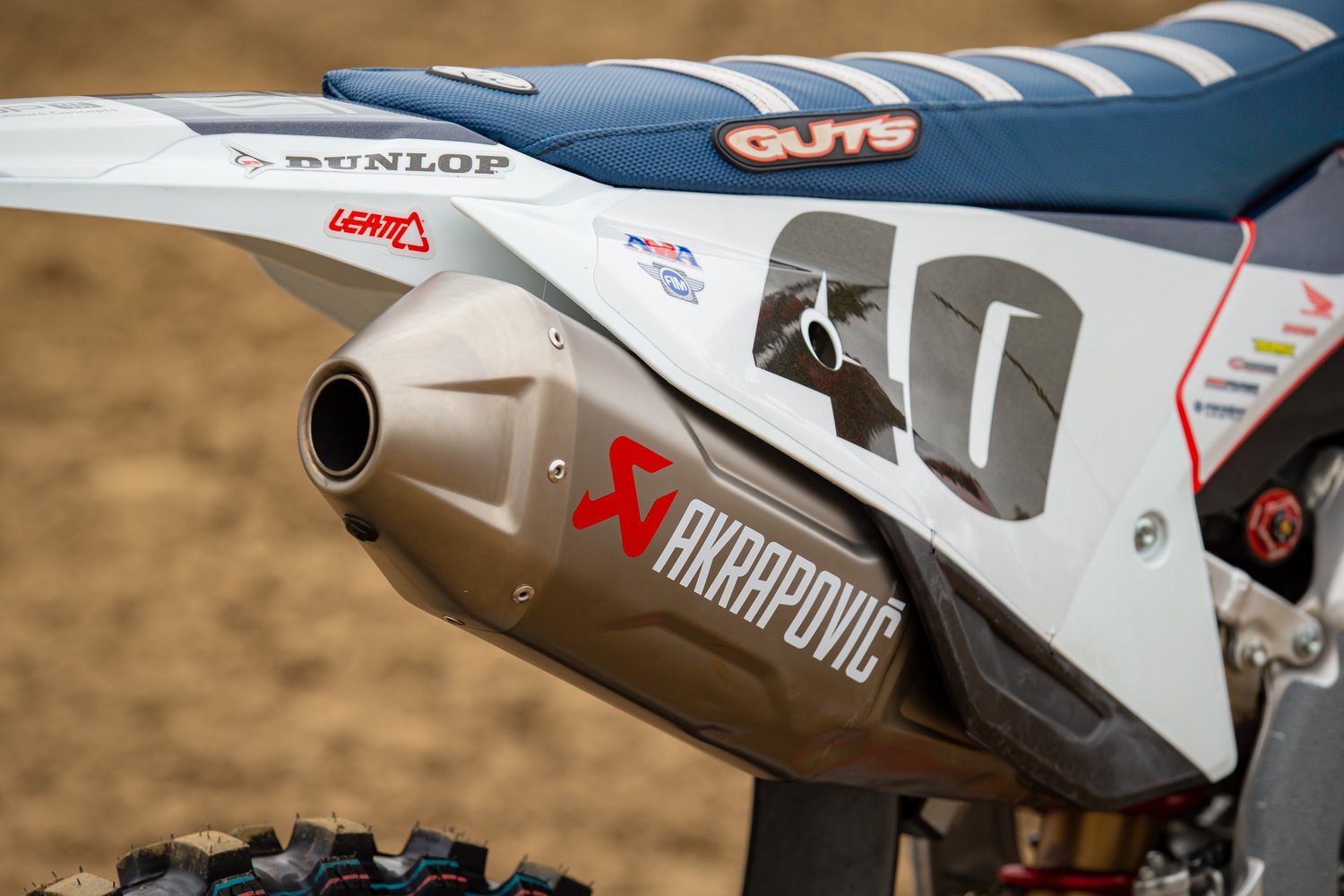 Once out on the track is when I realized that this Akrapovic muffler system could actually help this Honda chassis calm down just like it did to the 2020 chassis. The Evolution system lets the Honda’s engine roll on smoother at low RPM’s and that smoother feel helps the rear wheel connection as well as provides less pitching (off throttle) than the stock system. AKA MORE COMFORT!!! The Honda CRF450R now builds a smoother roll delivery and a pulling power that is longer through the mid range than the stock system. This type of character can allow you to use second gear in corners more because the second gear hit is not as abrupt or quick and that doesn’t upset your technique or the chassis. The Akrapovic also allows the rider to shift later out of the corner with its increased over-rev capabilities. Pulling power up top is increased slightly as your shifting points can be altered now because of the longer pull in each gear. The mid range recovery of the Akrapovic is not as good as the stock system, but honestly that is not a bad thing. The Honda has so much power to work with that a little less “hit” as well as “recovery” actually helps me roll my corners better and allows me to be more aggressive on the Honda. I want to be able to ride this red bike and not let it ride me after 15 minutes into a moto. The Akrapovic system relaxes the engine as well off throttle. There is not nearly as much engine braking with the Evolution system and that also helps your fork from feeling harsh on small de-cel bumps. 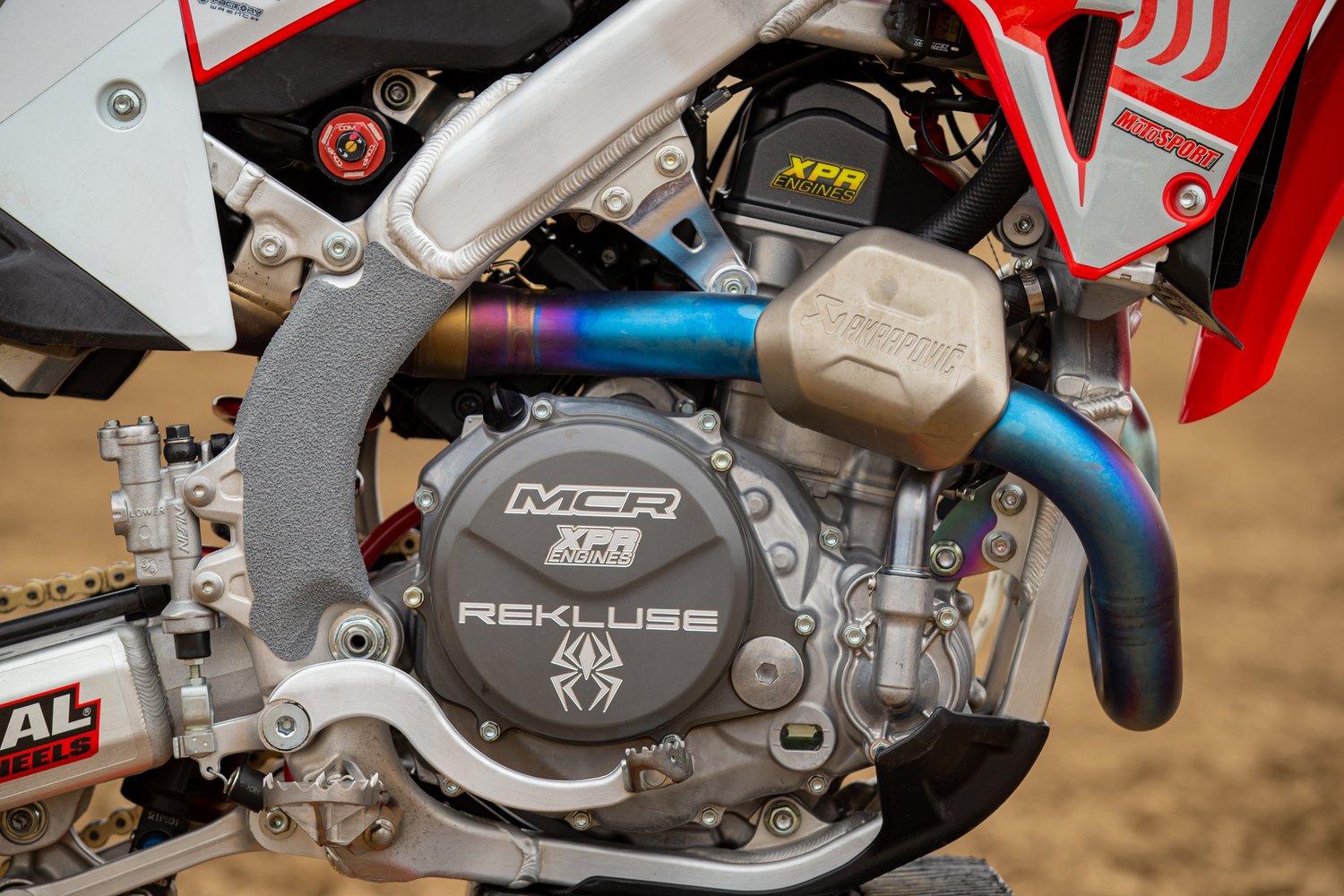 The pitch of the Akrapovic is ridiculously quiet when on the track and will almost give you that MXGP sound and feel. It still has that racey, crisp sound, but just not that raspy high pitch tone of the stock muffler. I was normally a map two guy with the stock muffler, but with the Akrapovic installed I am now a map one guy all day long because of the added rear wheel/friendlier connection. The only other muffler that I have tried that made a big difference on this bike was the FMF system, but this system really gives you a wider pulling power than the FMF. 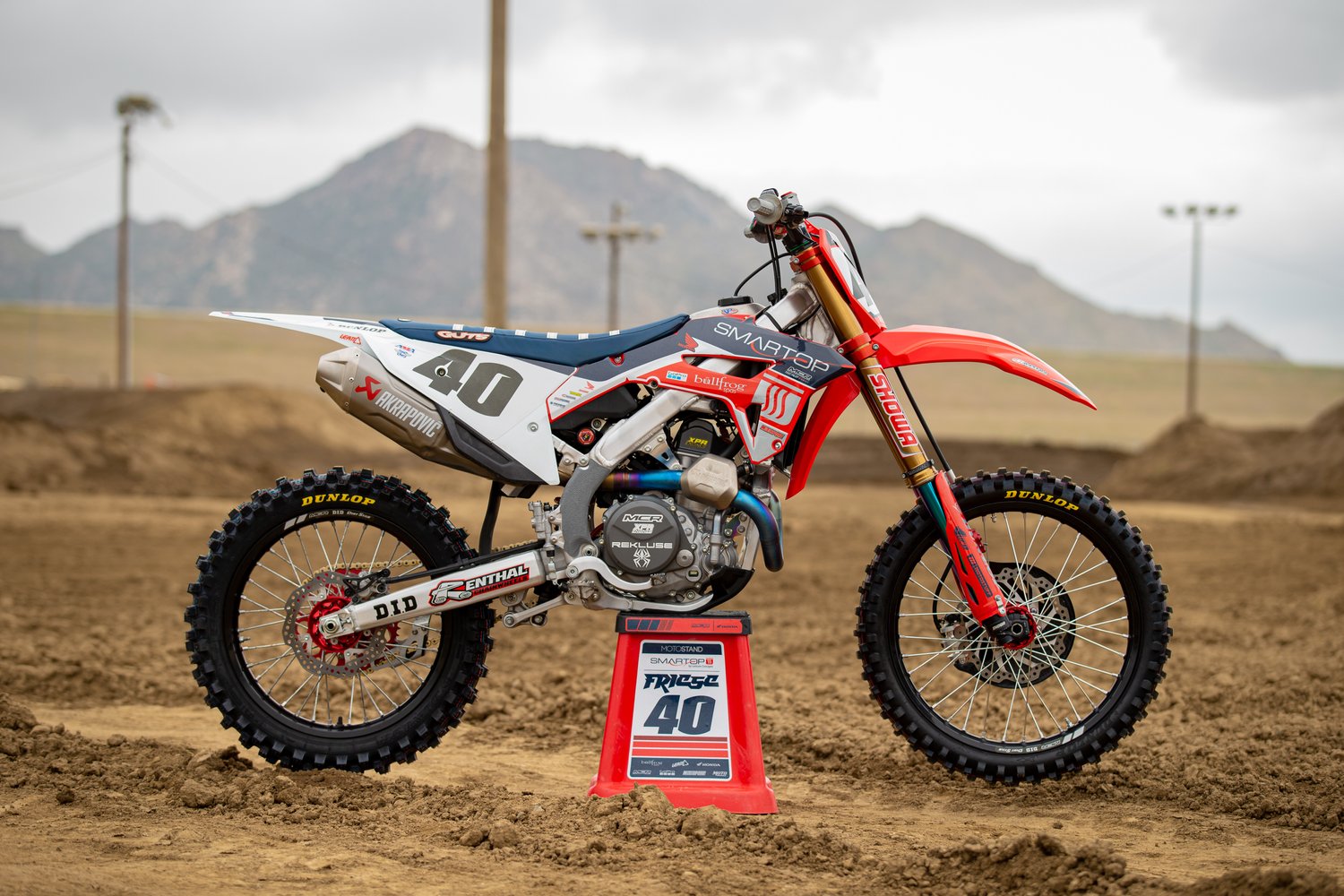 The Evolution muffler is the largest possible muffler for the space available. This allows increased sound silencing, which mitigates the impact on the natural environment while also facilitating improved flow for the exhaust gases to make their way from the combustion chamber with as few restrictions as possible. The added strength created by the design aids durability and provides enhanced resilience in the most demanding conditions. The Akrapovic mufflers have been one of the toughest mufflers that I have encountered over the past couple years when I have tested them! Akrapovic muffler packing usually outlasts others and to me just feels like quality stuff.

The Akrapovic system will save you 2 pounds over stock and will set you back a whopping $1547.00! Is the cost worth it? I wouldn’t go that far, but it is one of the better muffler systems that I have tried on the 21-22 Honda CRF450R. If I was a Honda owner I would rather invest in a Vortex ECU, have it mapped, and save a few hundred bucks, because the Vortex ECU can do more to help the power character/chassis feel than that of the Akrapovic system. However, if you do have a deep pocket book and are going to get a muffler system anyway, this Akrapovic would be a great choice along with the Vortex. The combo is an amazing feeling once out on the track! It’s a beautiful system and works very well on a wide variety of terrain/tracks.

Go to akrapovic.com to locate your nearest dealer.