No, the 2022 KX250 IS NOT changed from the 2021 model, but that didn’t stop us from getting a re-fresher on the green machine. Below, we will walk you through some positives and negatives of the bike to see if it could be the right bike for you. If this is not enough green content for your eyes, you can also listen to show #256 of the RMATVMC Keefer Tested Podcast to get more insight on the 2022 KX250. Also look below for some baseline settings for the green machine. 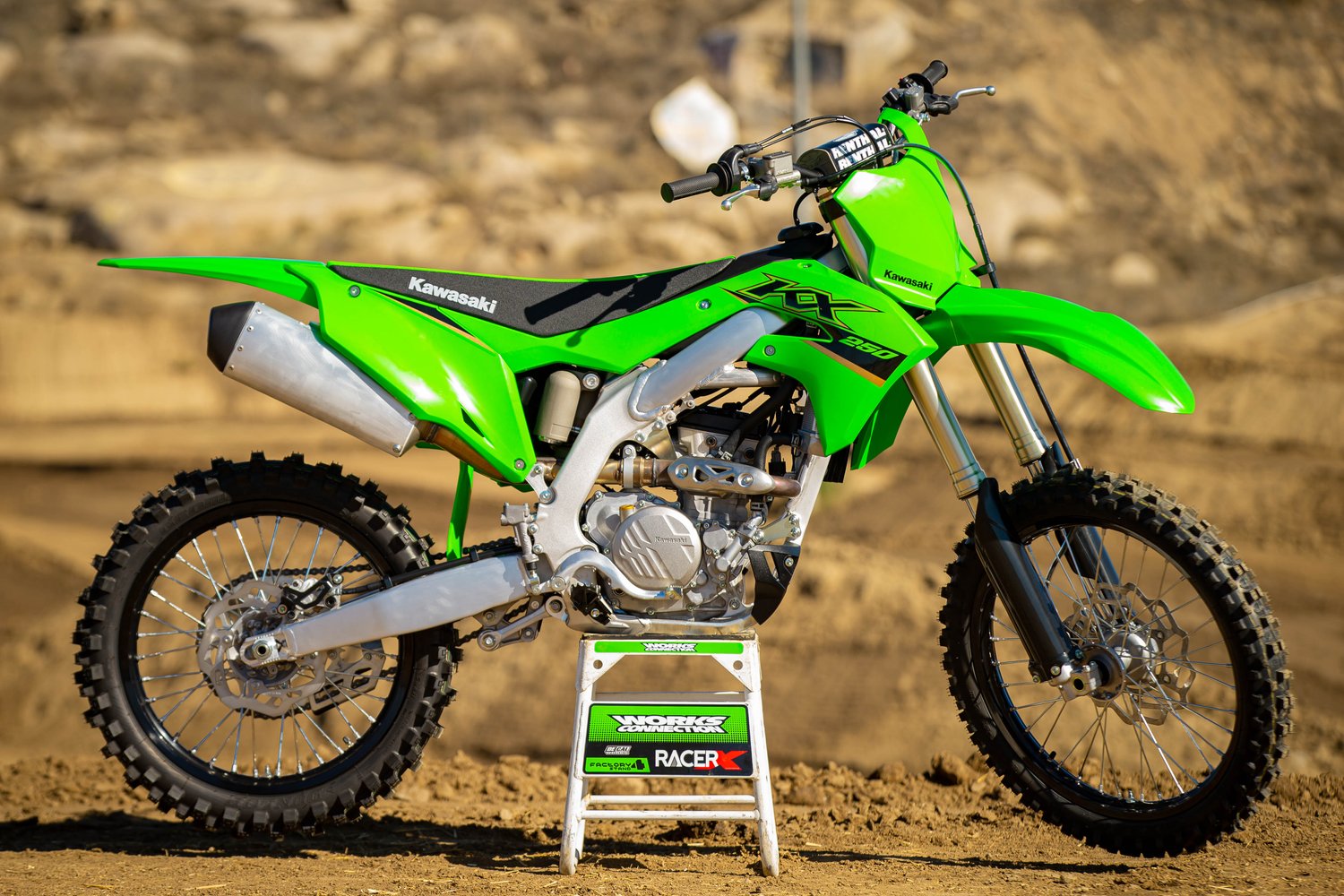 Even though the 2022 KX250 engine has been unchanged, Kawasaki is still one of the top three 250 four stroke engines in my opinion. I like that this engine can rev to 14,500 and you can feel that on the track when riding! The 2022 KX250′s engine characteristics are the same to the 2021 package with that great over-rev because of the increased rev limit they achieved in 2021. They achieved this higher rpm mainly by adding stiffer valve springs along with new camshaft timing. The power delivery is definitely better if you keep the rpm up and although the green bike doesn’t have that Yamaha mid range meat, it still pulls strong. Maintaining the correct gear is also important, meaning second gear will be used in most corners and will not give you that lugability like the Yamaha. The engine revs far enough that shifting to third gear is not needed until you have exited the corner and down the straight a bit. The FI mapping runs right great from the get-go.

There are three different preprogrammed settings available. These are changed via a coupler located on the right side just by the steering stem. Green is standard, white is aggressive, and black is mellow. This is the same system as what comes on the KX450. I tested all three and found improvements in certain areas with the white and black couplers. Each had improvements, but they also had some drawbacks. The Kawasaki technicians created a custom map that uses the ignition settings of the white coupler and the fuel mapping of the black coupler, which made for a noticeable improvement in the overall power and was accomplished by increasing the midrange torque, which helped it continue to make power further into the highest of rpm. I wouldn’t say it was huge, but it helped with mid rpm torque and seemed to make the power even longer into the upper rpm range. This is called the Chavez Map which has been around for a couple years now.

To do this custom mapping on your own, you would need to buy the accessory KX FI Calibration Kit, which retails for $699.95. It can be found on the Kawasaki website and ordered through your local dealer. This is an added expense, but if you are serious enough about your racing, you are probably already planning on getting your suspension revalved and purchasing an aftermarket exhaust, race gas, and more. So, it is worth considering adding this tool to your race budget.

The hydraulic clutch works well and to me isn’t as on/off as the Brembo system. This Nissin unit is the same system that is used on the KX450 and it has proven to work well. The clutch assembly is also using a cone-disc spring in place of a coil-spring system. The clutch friction plates have three different materials to help reduce clutch fade from heat. The clutch works well and plate life is on par with the Honda CRF450R system. It was easy to modulate and because of the hydraulic system, there was no fade during our motos. Shifting under load was reasonably easy with only the smallest amount of clutch lever input, which is much better than the KTM under load.

The KX250 chassis is based off the same platform as the KX450. For me, at 5’11, the Kawasaki chassis fits me well and I would say this would be true for most riders. The feel is almost Honda’esq but slimmer feeling. The rider triangle is neutral with plenty of room for adjustment. The handlebar can be moved forward or backward and the footpegs have an optional lower position for taller riders or someone looking to try to lower the bike’s center of gravity. The chassis is also narrow—possibly one of the narrowest four-stroke bikes on the market. Sitting on the KX250, I would say it is a little more of a sitting on top of the bike feeling, but not sitting as high as a KTM or Husqvarna.

The brakes are also great on the KX250 for 2022. The front brake system is the same as the KX450 including the 270mm front rotor. That means the bike now comes with the KX’s very distinct, thin front brake lever. The 250 rear brake has a smaller 240mm rear rotor (down from 250mm on 2020 model). The front brake lever is noticeably thinner than most other brands and to me is annoying. It is fairly easy to modulate and offers a medium to firm feel. The rear brake is noticeably improved with the smaller 240mm rotor over the KX450. Going to the 240 rear rotor helps the rear brake feel less touchy/grabby.