We have been hammering down a lot of motos on the 2022 KTM 250SX-F before it has to make its way back to the KTM offices to make way for the 2022.5 KTM 250 Factory Edition. There are still some consumers out there that are concerned about KTM’s durability and wonder if you can trust the Austrian machine over the course of several hard hours. Well to try and give some real world feedback, we have purposely been a little “over abusive” on this orange test steed to see if in fact we can trust the KTM engineers and their R&D department. We have just went over the 50 hour mark last week and have accumulated over 20 of those hours in the past four weeks on rough test tracks near our home. This KTM 250 SX-F has seen its fair share of the testing workload on many parts, accessories and product evaluations in its 50 hour lifespan. A 50 hour engine, on my scale, is like a 75-80 hour engine on a regular blue collar average weekend racer/rider. If you’re looking for shiny new photos of the 2022 KTM 250 SX-F you came to the wrong place. This thing is a work horse and not a show pony. Below are some of the key points I wanted to share with you current 2022 KTM 250 SX-F owners and maybe potential KTM buyers about our test unit. 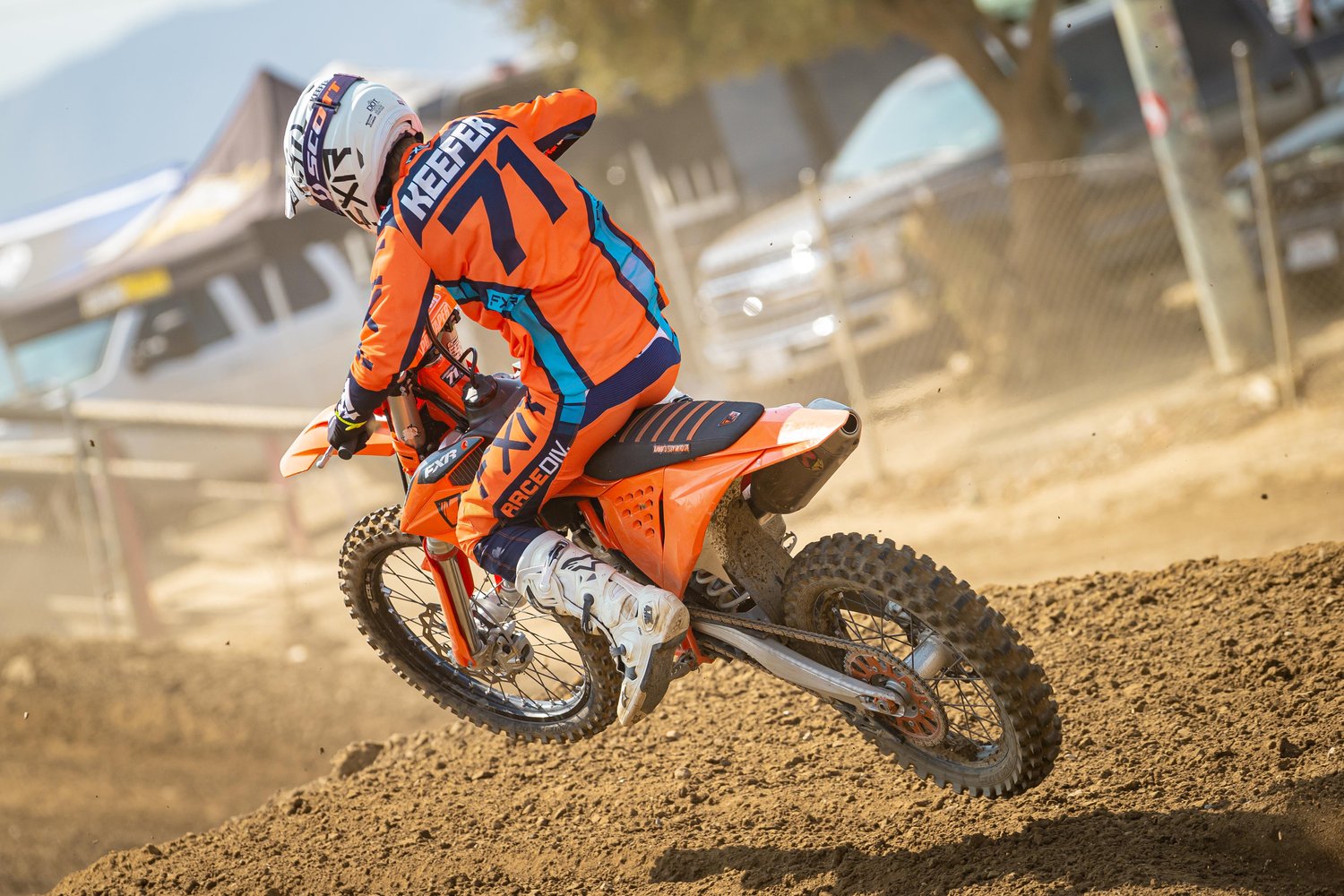 Engine/ECU Settings: KTM’s R&D department has done a good job with their ECU settings on the KTM 250 SX-F, but we were looking for more bottom end on this specific model when Aden races. Being in the B class out in California requires you to keep up with the Joneses so to speak so adding a little “meat” to the KTM 250 SX-F wasn’t off the table. When you first get your KTM 250 SX-F and ride her it may feel very tight, sluggish off the bottom end, slight de-cel popping, as well as have more engine braking than we would like. Some of these symptoms die off after 8-10 hours of riding time on the engine. We used the stock ECU box/settings for the first 18 hours and we had some of those symptoms until around hour 9, then the de-cel popping went away and also some of that sluggish feeling coming out of corners. So does that mean you current 2022 KTM 250 SX-F owners are screwed? No. I just wanted to make it clear that this bike is very much rideable in stock form without a ECU re-flash.

If you DO NOT want to spend the money on a Vortex ignition you can get your standard box re-flashed from Jamie at Twisted Development. Jamie has a better ECU setting for you current orange brigade riders out there. If you DO want to spend the extra $800.00 or so, the Vortex is simply magic for this engine. The engine delivery still remains so smooth yet easier to ride and increases the use of second and third gear. Going to the Vortex ignition gives you the option to ride with less effort while decreasing your lap times because the workload is simply less with the power character the Vortex gives the orange machine. I repeat you DO NOT have to have the Vortex to make the KTM 250 SX-F engine better! You can save some money and re-flash your current ECU, but if you want the most out of the engine without busting into it, this Vortex is really good!

What about durability once you go with a Vortex ignition? I have yet to have any durability issues with going to an aftermarket ECU that is correctly mapped from either said company above. It is one of the only modifications you can make to your machine that will make a noticeable difference in power without sacrificing the lifespan of your engine.

What about clutch life? Aden is not really hard on clutches, but we literally can go over 30 hours on one clutch and when we did check it, it was still good! At the 50.1 hour mark we have only installed one clutch. We change out the engine oil every 4 hours and use a 10/40 Synthetic by Blue Lubricants. We also DO NOT notice slippage under load when the engine gets hot. The hydraulic clutch is something that we have come to appreciate more through the years and although the engagement of the KTM is a little on/off feeling, the overall performance of the clutch itself is amazing under heavy race oriented type stress. 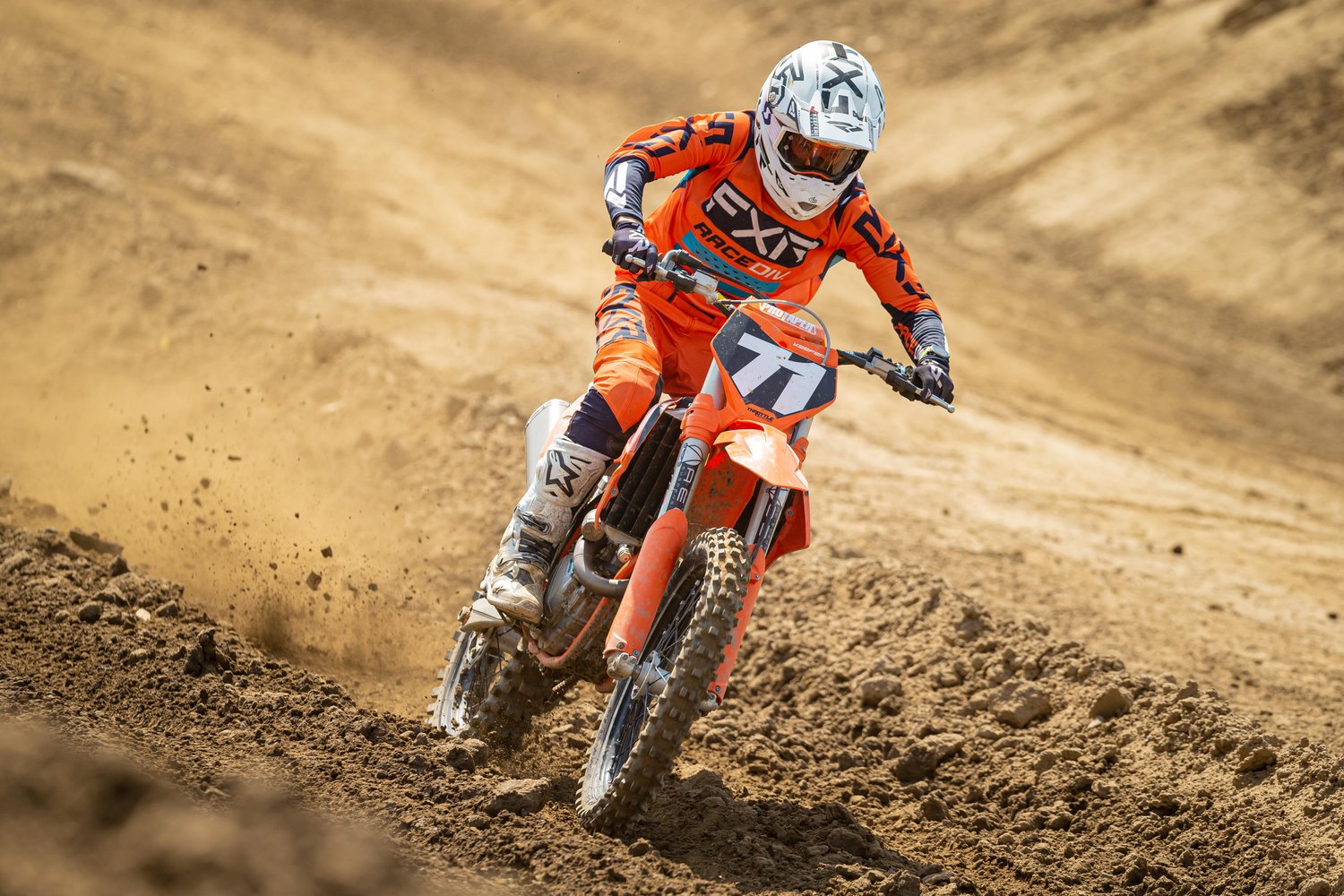 What about engine maintenance? I am not going to sit here and tell you I am some great mechanic and I am busing out valve clearance checks every 20 hours. We did check the valve clearance after 25 hours and they were within spec and I haven’t checked them since. Like I mentioned above I have used Blud Racing 10/40 in this bike and have changed the oil every 4 hours. I am usually a 2-3 engine hour oil change kind of guy, but the KTM has held the rigorous amount of riding time that I have put on it.

Chassis/Suspension: During the course of the 50 hours we spent on this machine, we decided to stick with the stock WP suspension, but had it valved from REP/AEO. We wanted to stick with the AER fork and see if we could get it comfortable enough and not have to resort to a spring conversion. The setting that Mark at REP provided us gave more front end feel through the fork/front end and was more consistent throughout the day than the stock setting. My 135 pound son had a chance to ride with some WP Pro Components set up for him, but he actually chose the AER set up because he liked how much comfort he had versus the Pro Component fork. The REP valved shock had better high speed compression feel on heavy loads and the combination of the new valving and REP knuckle/link provided more rear wheel traction than the stock set up we used before this REP setting. If you’re a weekend warrior just looking for more comfort on your KTM 250SX-F, there is hope that you can get that with some re-valving though REP.

Gearing: We have ran the stock gearing as well as tried going to a 14/52 and found out that we like the 14/52 set up to get some extra low end snap as well as third gear roll on out of corners. We like the 14/52’s traction character out of corners, but you must realize that you can shift a little earlier with this gearing to feel that extra rear wheel traction. With the stock gearing, the KTM 250 SX-F kind of forces you to use second gear longer, but with the added tooth, it can help you third gear luggers. Give it a try if you’re a third gear kind of rider. We also only have changed the Sunstar sprockets/DID ERT 3 chain once during this 50 hour period!

Handlebars/Grips: My son and I are both crossbar-less type of riders so we chose the Pro Taper EVO Race Team bend that just came out from Pro Taper. The Race Team bend is a 810mm width, 91mm height, 49mm rise, 52mm sweep and is a great flat that keeps you over the front of the machine. We can get over the front of the bike better out of corners, but our elbows are up a little more naturally and we feel better when standing on the bike. If you’re a crossbar kind of guy, the Pro Taper Fuzion bar has a EVO-ish flex character and will not feel as rigid as some other crossbar brands. Also note that the stock lock-on-grips/throttle tube also can get heavy after around 20 hours, so check your plastic tube for wear. The plastic on the lock on grips can get rough inside and make your throttle pull hard. If you ware looking to put standard grips on go with a ZRT aluminum throttle as it will make your throttle so buttery you will never want to go back to a plastic tube again. Plus the ZRT is the toughest aluminum throttle tube we have ever come across.

Air Filter: Buy yourself a KTM 250SX two-stroke air filter cage because they come without a backfire screen and then go get a Twin Air filter. Just doing this little modification gave me some added RPM response which helps the KTM feel even lighter in tight sections of any given track. 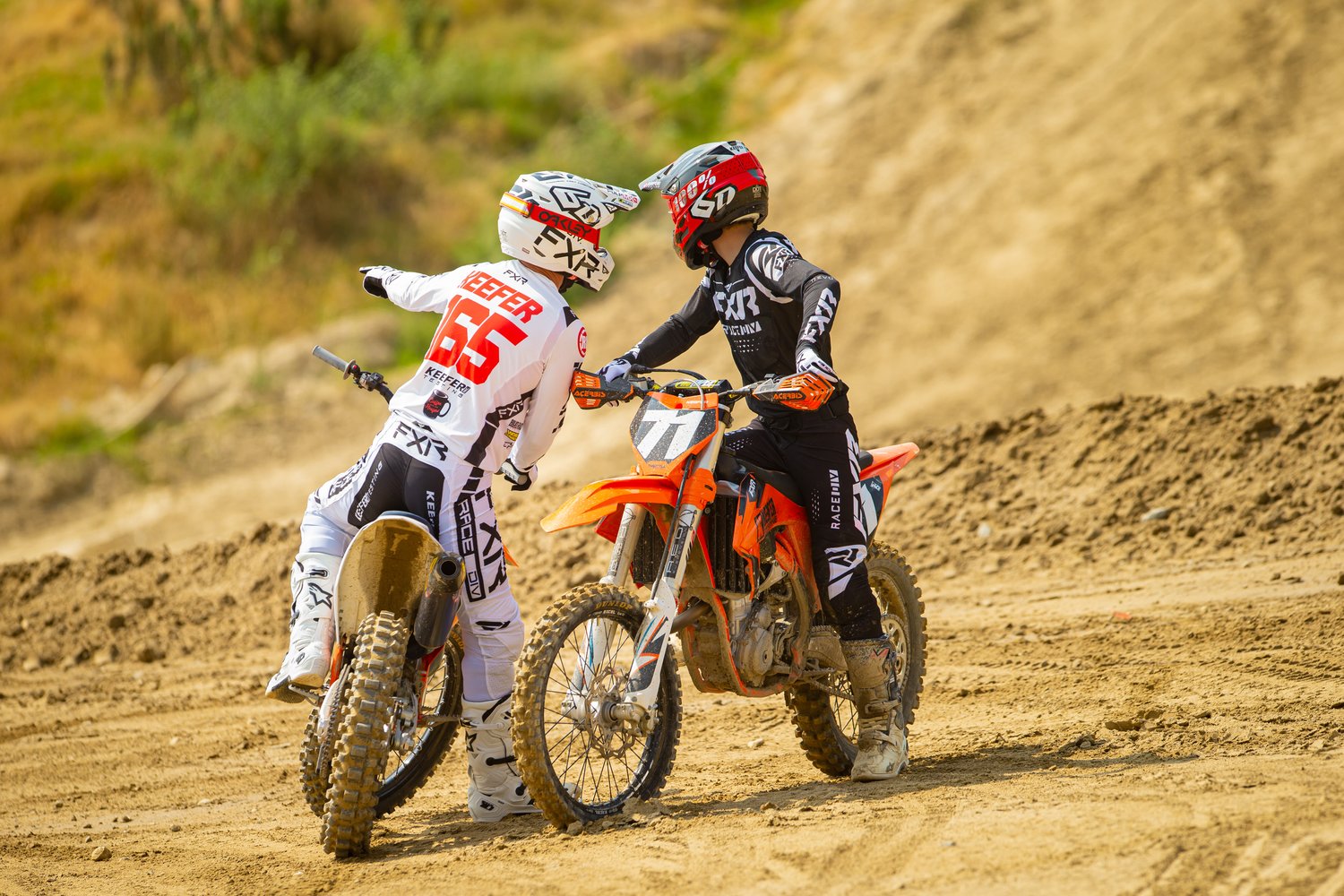 Wheels/Tires/Axle Blocks: You will have to check your sprocket bolts and spokes religiously, but if you use a little blue Loctite on your sprocket bolts you should be good. You can also increase the rear wheel traction by going with some Works Connection Elite axle blocks or Ride Engineering axle blocks that will eliminate the fixed left side axle block from your axle. This allows both axle blocks to float under heavy load (acceleration) and will not give you a binding rear end (harsh) feel. It sounds minimal, but makes a difference on acceleration chop. You can also run your wheel a little farther back if you’re changing your gearing to get some added straight line stability that the KTM can use at times. If there is a weak point to the KTM, it is the wheels. We have blown out two rear wheels in the past six months so maybe upgrading to a better wheel set could be in your future if you’re slightly hard on your wheels because you over jump or under jump a lot.

Rear Brake Pedal Spring: The stock one sucks! We break the brake pedal spring every 4-6 hours! You either are going to have to load up on brake pedal springs or go with a CRF450R brake pedal spring with the rubber over it (condom style). This helps with the vibration that the spring experiences, so it doesn’t break. Orrrr, simply order a FAAST Co. rear brake return spring and you’re golden.