Do you have a little grom that wants to ride but maybe you can’t get him or her out the track as much as you like because you are pressed for time? I stuck my son Aden on a small electric motorcycle when he was five years old because he could ride in the backyard after school, not bother the neighbors and because of that, Aden has better/safer technique today because of it. The Honda CRF E-2 is not a race machine for kids, but rather an electric motorcycle that helps gets children started into our great sport of off-road riding. Greenger and Honda have come together to create the CRF-E2 electric motorcycle. The CRF-E2 frame is a twin-spar aluminum design patterned after Honda’s adult motocrossers, disc brakes slow it down, Kenda Millville K771 tires put the electric power to the ground, and the E2 has a linkage-less shock with adjustment for rebound damping and spring preload. The E2’s seat is adjustable to a height of either 24.8 or 25.5 inches. In the low position, the seat is 3.2 inches higher than the CRF50F, and the high seat position is 0.4 inches lower than the CRF110F. The E2 has a keyed ignition. Once the key is in the switched to the on position, the rider or supervising adult can select one of two power modes. With the power mode engaged, push the on button (a repurposed e-start button), and all the rider has to do is twist the throttle. Stage 1 limits the speed of the E2 to 10 mph, while Stage 2 ups the ante to 20 mph. The 3.4 horsepower peak output is not nearly as important as the 18.4 ft-lbs of torque available. 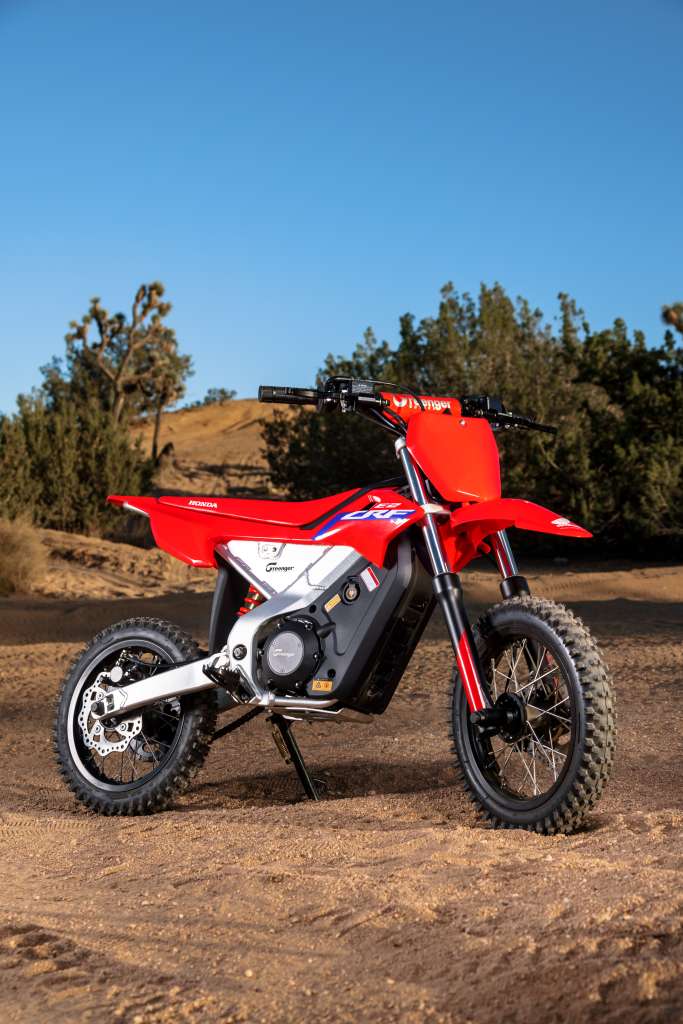 Electric motors on motorcycles are only as usable as the controller for the motor allows (I have learned this working with Alta in the past). With so much torque available as soon as an electric motor turns, it must be smoothed down for the power to be usable. In Stage 1, we found the power delivery a little abrupt when getting underway, especially when the rider is a true beginner while trying to work through obstacles that require some cornering. Once the rider gets going, the throttle response is smoother and the 10-mph speed restriction will allow parents to relax a little. Stage 2 still has the same abrupt low end power but climbs farther yet still is safe for open spaces for beginners. Once the rider gets used to that initial hit, the bike is friendly to get around on. When teaching kids to ride however, make sure to bring them out in very open spaces in order to allow the mistakes not to compound into running into another object (like a parked car, a wall, a tree, etc.) It takes four hours to bring the battery from zero charge to full with the standard charger—the optional quick charger takes two hours to get the battery to an 80 percent charge. We get around 90 minutes of ride time on a full charge with terrain ranging from hard pack to sand. If you’re looking for another battery, those suckers will set you back an extra 1K, which I doubt you will want/need.

As far as the suspension goes, it is nice to have some adjustability within the shock, but when adults hop on—as we always do—the rear suspension nearly bottoms out. That tells you it’s set up for kids under the maximum weight of 100 pounds. At around 60 pounds, our tester had no complaints. The shock has rebound-damping adjustment, which seems over kill on a trailbike for kids. If your youngster asks for damping adjustments, it’s time to rethink your choice of dirt bike. Suspension travel is just under four inches at each end—plenty for kids and a nice match to the motor. The hydraulic disc brakes are controlled by an adjustable lever on the aluminum handlebar (which is nice for smaller or growing hands/fingers). Our tester liked the action of the brakes, and we haven’t seen him struggle or complain about them being too touchy. No wash outs yet! With the E2 having no foot controls, the rider’s feet are securely planted on the footpegs and that means their small little heads will not be looking down instead of outward/in front of them. Safety first people! With no engine oil, nor an air filter, and no cable-actuated controls, the E2 maintenance program is easy peasy. The chain might require adjustment now and then, depending on how hard the bike is ridden. You definitely don’t have to be a gnarly die hard dirt bike mechanic to own a CRF-E2. Overall, I think this is a great way for kids to learn how to ride and keep them on dirt bikes for years to come. #KeepKidsOnDirtBikes