I will be real with you guys, I can’t afford a 80,000 truck but I know some of you out there are able to afford it. I was lucky enough to take a new 2022 GMC Sierra 1500 AT4X for a while and drive it to the tracks as well as do some off-roading in my back yard of the high desert. I haven’t had to load up some bikes in a truck in a while but here is a breakdown of what I thought of the new GMC while I drove it. Oh and I am NOT a big vehicle test driver, I am just giving you all a Moto guy opinion on a truck. Use it as you will. 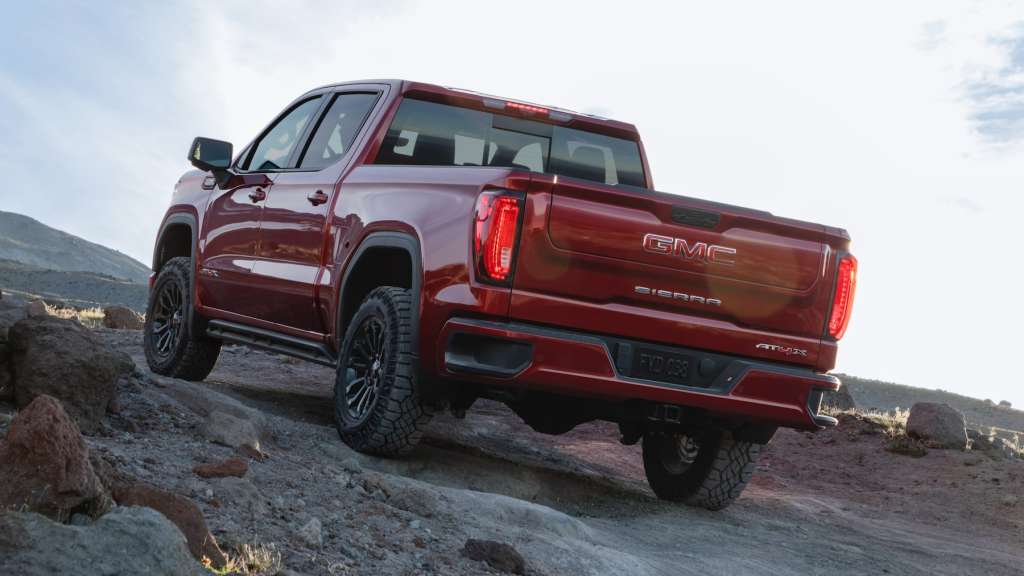 The GMC Sierra 1500 lineup has been updated for mid-2022 with fresh styling and a more refined interior, but that’s not the exciting news. The full-size pickup is now available in a crew cab, short bed AT4X model that promises the most extreme off-road capability of any Sierra 1500. It’s a mechanical twin to the 2022 Chevrolet Silverado ZR2 and features all the same technical upgrades.

Key among them is a high performance suspension system designed to handle everything from cruising down the boulevard to rock crawling and some off-road driving when you want to get your adrenaline fix, when you’re not riding moto. It offers increased wheel travel and uses a special type of shock absorber built by race car builder Multimatic that was originally developed for IndyCars and Formula One cars and was used on the most recent Chevrolet Camaro Z28, but has since been adopted for off-road use and is also available in the midsize Chevrolet Colorado ZR2.

The shocks use a series of spool valves to precisely control the flow of the fluid within them. They’re tuned to give the shocks progressive damping that keeps them soft on rough roads at slow speeds, but stiffens them up when subjected to quick, jarring impacts to keep the body under control in quick turns and the suspension from bottoming out over big bumps. 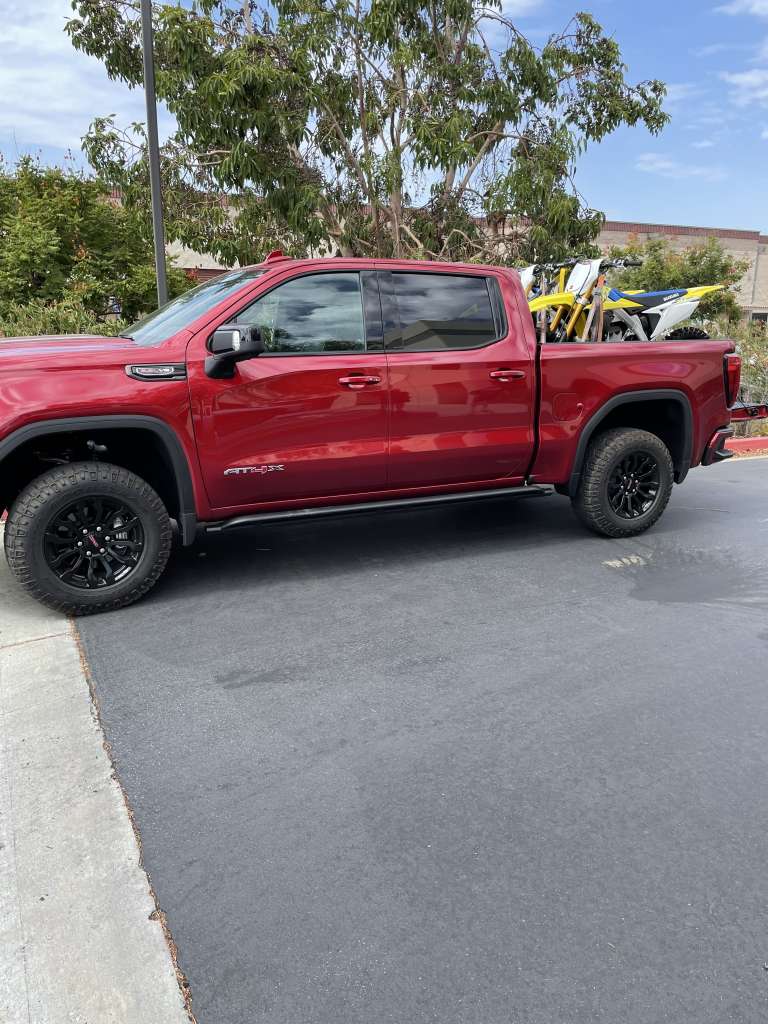 It also has a two-inch body lift compared to other Sierras, 11.1 inches of ground clearance and improved underbody protection that includes a larger skid plate for the transfer case. The cabin is dressed to the nines to help justify the AT4X’s starting price of $77,395, and features leather upholstery, ash wood trim, climate-controlled massaging front seats, and a 360-degree camera system for the new 13.4-inch touchscreen infotainment system display that is the centerpiece of the new interior look.

Out back, the AT4X has GMC’s Multi-Pro tailgate, which can be opened six different ways to create various storage solutions, a desk or a step (which old Moto guys need). The only major option available on the very loaded truck is a $1,970 technology package that adds a video rearview mirror, head-up display adaptive cruise control and a power adjustable steering column. Its payload rating is 1,420 pounds and it can tow up to 8,900 pounds.

The AT4X’s closest competitor is the Ford F-150 Raptor, which has a wider body and more aggressive suspension, although its 450 hp turbocharged 3.5-liter V6 doesn’t add a lot more punch comparatively when I drove one recently back to back with the AT4X. With some irony, the AT4X’s equipment provides it with a better on road ride than some of the more street smart Sierras, although its lifted stance and knobby tires contribute to a combined fuel economy rating of just 16 mpg, but on the Southern California freeways it was tough to keep this vehicle below 90mph because it drives so smooth. I haven’t been in a true that drives as good as the AT4X. On our local freeways here in So. Cal. There is always some type of construction and the imperfections on the highways are everywhere. This AT4X provides driving comfort as well as a predictable feel when hitting some sizable potholes that our local government seem to neglect.

On the dirt, the changes on the AT4X prove to turn it into a formidable machine. The power and 10 inches of wheel travel are more than adequate for climbing hills, getting into some tight spots near my secret spots and storming back home on the fire roads. The suspension proves to be a marvel in both situations because it’s so well-behaved that it’s hard to believe it doesn’t have any computer control. It softly cradles the truck without bouncing as it rides over rolling whoop-de-doos and soaks up washboard surfaces and small jumps at higher speeds. To explain it in Moto terms, it would be like having A-Kit suspension on your bike, which gives you confidence to hit obstacles harder.

A special Terrain mode for the traction management system holds on to low gears longer when you’re in 4×4 Low to provide increased engine braking to mimic the sort of one-pedal driving electric cars are capable of (to feel this is bad ass by the way). The AT4X’s limitations compared to the Raptor are evident, but pretty insignificant if you’re not planning to go blasting through the desert at 100 mph (which I DO NOT), while its narrower stance makes it better for tight spots and parking at the mall, just in case your wife decides to take it. 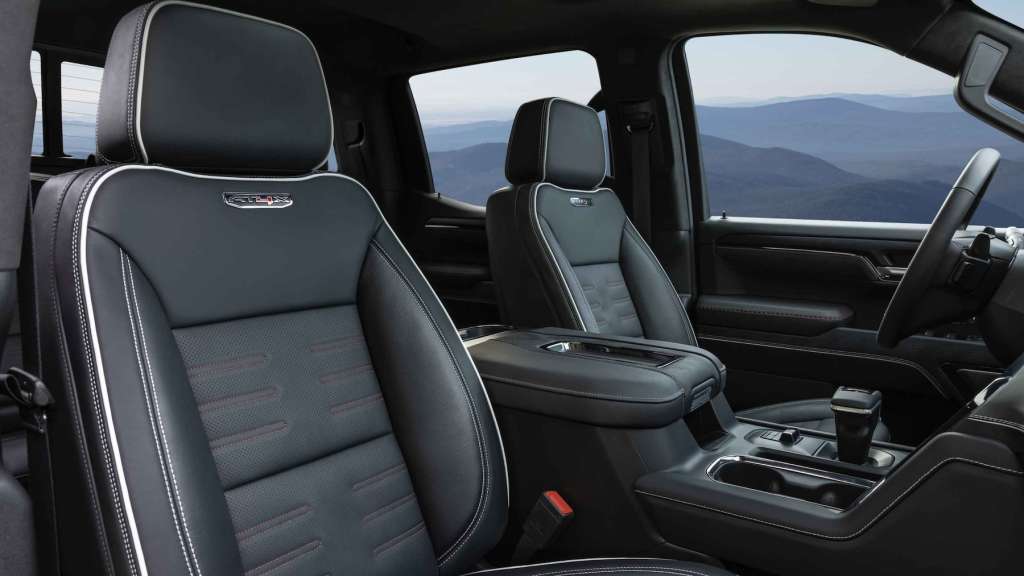 The interior is amazing like we mentioned but the display unit in the GMC AT4X is really easy to use even though you think it may be overwhelming. Dirt bike riders usually aren’t the smartest bunch, but even this idiot could manage his way around the large display the AT4X comes with. Not to mention I could blast Creed on the sweet Bose speakers all drive long just to piss my kid off when we are on the road to the track! All the wireless connectivity is a godsend as well for your tech hungry children. When Heather would drive me to the track (yes, that happened), I hopped in the back seat and literally thought I was in the front there is so much room. Even my tall body Travis Preston who is 6’2 thought the spacious rear seats were so good, he was thinking of upgrading to a GMC from his RAM.

The main drawback, besides the price tag, despite having all-weather floormats, the AT4X is so dressy you might be disinclined to get it dirty. I suggest you get over that feeling if you buy one, or else you won’t really get what you paid for. It’s that fun to drive. Maybe when I get some more money or if someone decides to buy Keefer Inc., I can get in one of these because driving to Colorado in the AT4X would be much more pleasurable than the ol’ Mercedes Sprinter Van.